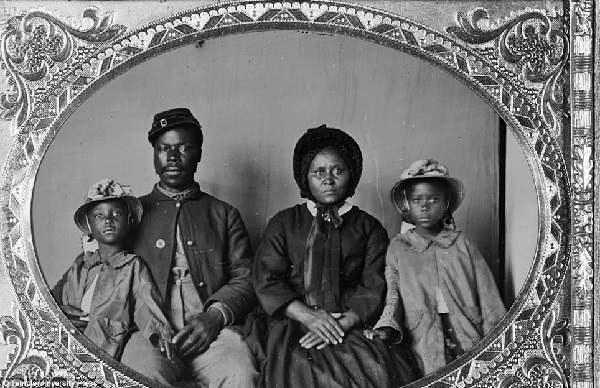 Soldier Samuel Smith and his family

In this third and final post, I’d like to share a few more items illustrating the riches that can be found in civil war pension records. Take a look at Part 1 and Part 2 of this topic if you missed it.

I was surprised at the number of former slaveowners (and whites in general) that supplied testimony to assist former slaves to gain a pension.

I imagined there’d be more widespread anger at slaves who enlisted during the war. I’m not sure exactly what conclusion to draw from this. Perhaps after the war was over, some slaveowners decided to “let bygones be bygones.” Maybe these were former slaves they had affection for.

**For the pension of Henry Davy, a request to find his birthdate was sent to the daughter of his former owner, who was then married and living in Atlanta, GA. In trying to confirm his age, Mrs. Smith responded that “the family bible has no record of the colored people.”

**However, another local white man named G.W. Bryant submitted the following: “I have seen several men that knowed the pensioner all the way from boyhood. One man is now ninety some odd years and one collard man that was raised with him is now 100 years old. These men will all testify that he is over 80 years old. I will ask you to further consider the old darkies case.”

**David G. Taylor, of Roane County, Tenn.,  testified for his former slave Frances Sevier. “I bought her at Kingston, Tenn., about 1862, can’t give the date, I bought her from Paul and McGuinn Traders. She had a former husband named Marsh Sevier, a slave on the Sevier farm just outside of Kingston…He asked me to let him have her for his wife and after talking with him on the subject I consented.” [Frances was 13 years old].

**They “do not know what record of birth was kept, but their sister Mrs. Gant was present at the births.” Mrs. Gant testified that she “was living at home with her father [and present] when the children were born and the dates of birth [provided] are correct.” 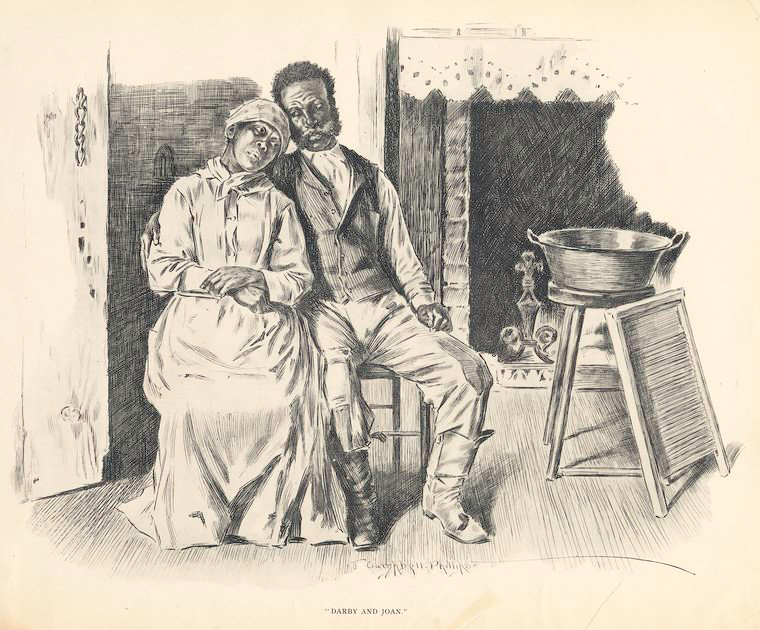 Finding details about family relationships among enslaved people is difficult to obtain. Civil war pensions do not disappoint in this area:

**Eleanor Waters testified during her pension application for husband Harrison Waters’ service. Her cousin Tom was living in her home & an accusation had been made that she had broken up Tom’s marriage and was having a love relationship with him.

**That claim could have derailed her application, so she tried to clarify the relationship. “My owner in slavery was Mr. James Lucas of Annapolis Pike…and my mother Maria Johnson was a sister of Tom’s mother, Emily Johnson and we are about all of the Johnson family left and we don’t like to separate.”

**Tom himself reiterated that both their “mothers are dead now. Eleanor and I…are from a family which is mighty nigh extinct as I have only one living brother, Nicholas Johnson and no sisters.”

**Martha Davy, during her deposition for her husband Henry’s service, revealed details of her family: “My maiden name was Martha Ann Doran. All my fellow slaves are dead or gone. I have no brothers or sisters living. I have a half sister Ellen Benton living here.

**Lucinda Jones, testifying for a pension for her father Alfred Suggs stated: “[My] parents were Sallie Ann and Alfred Suggs. [They were] married before the war when no record of any kind was kept of the marriages of the colored people.”

**Henny Rideout of Talbot County, MD, testified for a pension under her son John’s service. During her testimony, she provided names and birth dates of her husband, their 4 children, as well as her husband’s mother.

**Carpenter Eskridge, testifying on behalf of Frances Brown, stated: “The present husband[Winston Brown] of claimant is my nephew. His father was my brother, he was named Jesse Eskridge. The mother of Winston Brown was Malinda Brown.”

**And finally, Carpenter Eskridge’s testimony also tells a story too good to leave out: “I was formerly a slave to Sam Eskridge who lived 4 miles below Kingston, Tenn. I was hired to James Sevier when the war broke out and continued to live on the Sevier Place…

**until General [Nathan Bedford] Forest came in here about Aug. or Sep. 1863 and carried me and some others off with him…we were put in the Confederate service. I cooked for a Capt. Higgins, Marsh drove a baggage wagon and Frank drove a forge wagon.

**We remained with the Confederates 2 or 3 months…we got a chance to run away together and did so.

I got back to Kingston by Christmas in cold weather; said Marsh and I went back to the Sevier Place.”

I hope these three posts on civil war pensions have suggested new ways to use the rich information these records can contain.

Whether you find an ancestor who served or not, reviewing these records for enslaved people from a specific locale can open a door into lives of all the slaves living there.

These records shed light on everything from post-civil war work, migrations, the last slaveowner, migrations, surnames, and family relationships. They discuss births and deaths, marriages and children, military service and injuries, and former owners.

If you have an interesting story you discovered in a pension file, I’d love to hear about it in the comments.