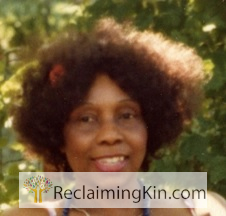 Shown at left is my grandmother, the ever-wonderful Mattie Mae Springer. She was born in Hardin County, TN in 1921.  Both of her parents’ roots have been brick walls.

Her parents, Walter Springer and Effie Fendricks, were both also born in Tennessee. It is their parents who have stopped me cold.

Both sets of parents indicate on the census that they were born in Alabama. The question is where in Alabama?

Effie’s father was Mike Fendricks. I located him in 1880 as a young man, newly married in Hardin County, TN. The surname is odd. There was no one else living nearby with that strange surname.

In fact, it took me several years to locate Mike in 1880 because the census taker wrote Finwick instead of Fendricks.

Mike Fendricks was not in Tennessee in 1870. I assumed he was still living in Alabama at that point.

I found Mike in 1900 (spelled Fendrix) and subsequently on all the other censuses until his death in 1928.

The most interesting thing in this census was that his father’s birthplace was Washington, DC. That is a good example of the evidence census records can provide if we search it thoroughly.

Mike Fendricks life before 1880 was like a gaping black hole, where I just couldn’t find anything. I was not going to search for him in Alabama without having a lead on what county he was from.

I decided to use the principle of cluster research. Mike Fendricks lived with a man named Deed Suggs in 1920 who was also born in Alabama. Perhaps they migrated together?  Focusing on Dee’s roots, he led me back to Lawrence County, Alabama.

There I noticed local African-Americans with the surname Fendrix in 1910, 1920, etc. This was very promising since the name is so uncommon.

When I traced some of these other Fendricks, I found another man named Mike “Fenrick” in 1880 in Lawrence County! Now I was really confused.Who was he?

Remember, my Mike Fendricks was 27 years old and living in Tennessee by 1880. Could this “Mike Fenrick” be his father? This man was 53 years old in 1880, with a wife and children.

I can’t make out his birthplace on this census. It is transcribed as Massachusetts (MA) on Ancestry.com, which doesn’t seem right

Trying to find this 2nd “Mike Fenrick” in 1870 proved fruitless. Until I used the magical wildcard symbol *! I decided to search for all black males, no first name, last name Fen*.

The wife and children verify that this is the same man called Mike Fendrix in 1880. My guess is that the middle initial “M” is for Mike.

My Mike is not in this household in 1870 (later I found him living with his mother).

When I researched the Fendricks/Fendrix surname for white slaveowners, most of them lived in the Washington DC area in the 1850 and 1860. My hypothesis is that Mike Fendrick’s father (John Mike) was sold to the deep South from owners in DC during the domestic slave trade.

Now mu task turns to finding possible slaveowners for John Mike Fendricks. High on the list is  Samuel Shackelford, a large slaveowner who lived closest to John Mike, as well as the Bynum family.