The Fleet Family of Washington, D.C. 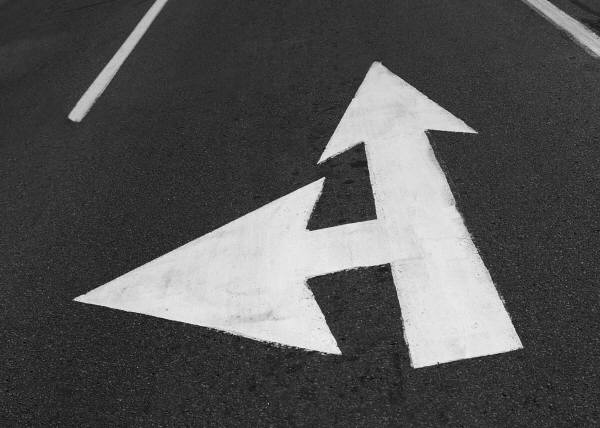 Sometimes our research veers off into an unexpected direction.That happened to me with the Fleet family.

Usually its because we come across a person or circumstance that is of interest.

My 3rd great-grandfather, Perry Simpson, married a woman named Margaret Fleet. Her family is fascinating, even though she technically is not a blood relative.

After Margaret and Perry married, they moved to Montgomery County, Maryland. But Margaret was originally from Washington, D.C.

She appears in the 1850, 1860, and 1870 census records in the 1st Ward of Washington D.C. She was a free black woman before general emancipation.

This is the record that made me take a closer look at the Fleets (click to enlarge):

I was fascinated by the fact that Mary’s father’s birthplace was Mexico. Was this a fluke? Was he really Mexican? I started tracking this family through the available records.

Margaret birthed many children before her marriage to Perry; nine according to the 1900 census. However, no known record documents a marriage to any other man.

In 1850, Margaret was a free black woman in a city bursting with contradictions. Enslaved but “quasi-free” people, lived alongside thousands of free blacks.

Quasi-free enslaved people had to pay their owner’s a monthly fee, but otherwise lived on their own.

Washington was the site of an active slave trade, and a notorious slave pen . It became made an easy target for abolitionists looking to shame the young nation.

During the next decade, events would continue to escalate around slavery, culminating in Civil War. In 1862, slavery was outlawed in D.C., creating a haven for thousands of enslaved people from the surrounding states.

First Freed: Washington D.C. in the Emancipation Era, edited by Elizabeth Clark-Lewis, describes the lives of African-Americans in D.C. at that time. 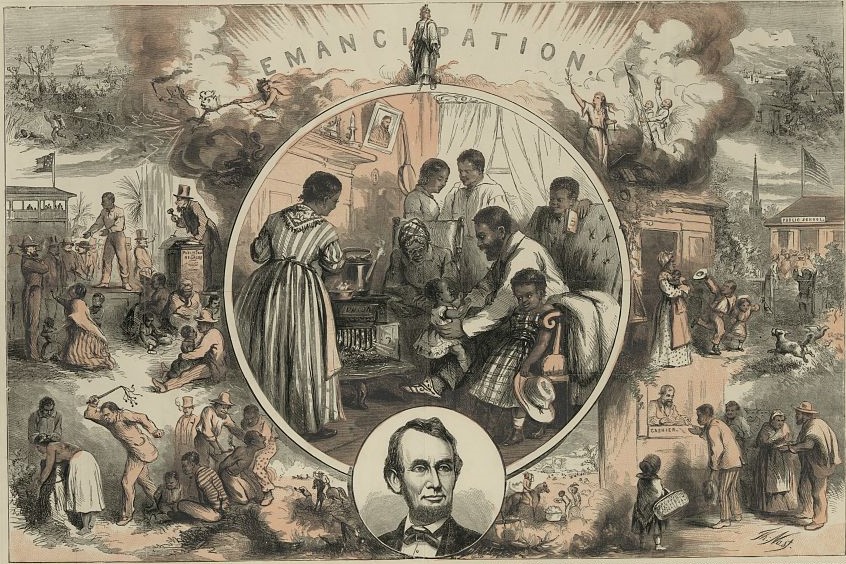 Margaret came from a family of skilled artisans. Her father was Henry Fleet Jr., a free black shoemaker from Georgetown.

He learned the trade from his father, Henry Fleet Sr. Today, Georgetown is a mecca of white wealth and privilege, but it was historically home to a thriving freed black community.

Henry Fleet Sr. purchased his wife Ann and 5 or 6 children, whom he later freed. Henry Fleet Sr. was doing well enough that several boys were apprenticed to him in the early 1800s to learn the trade of shoemaking.

An 1803 apprenticeship document noted that “he [Henry Sr.] purchased his son Henry Jr. in 1812.” It mentions that the son was also a shoemaker.

This family history obviously helped Margaret. She was assessed $25 in the brand new federal tax system as a Retail Liquor Dealer in 1864, while living at K Street and 21st street.

In 1870, Margaret’s  daughters Annie and Cora were both dressmakers. Dressmaking was a skilled occupation, and one of the best for a free black woman of that era.

I wonder if they knew Elizabeth Keckley, the famous free black dressmaker for Mrs. Lincoln? My guess is yes.

In that same 1870 census, 100 year old Sarah Carter, Margaret’s mother, lived with her! Margaret also owned $1000 worth of real estate, no small feat for a black person, much less a black female. 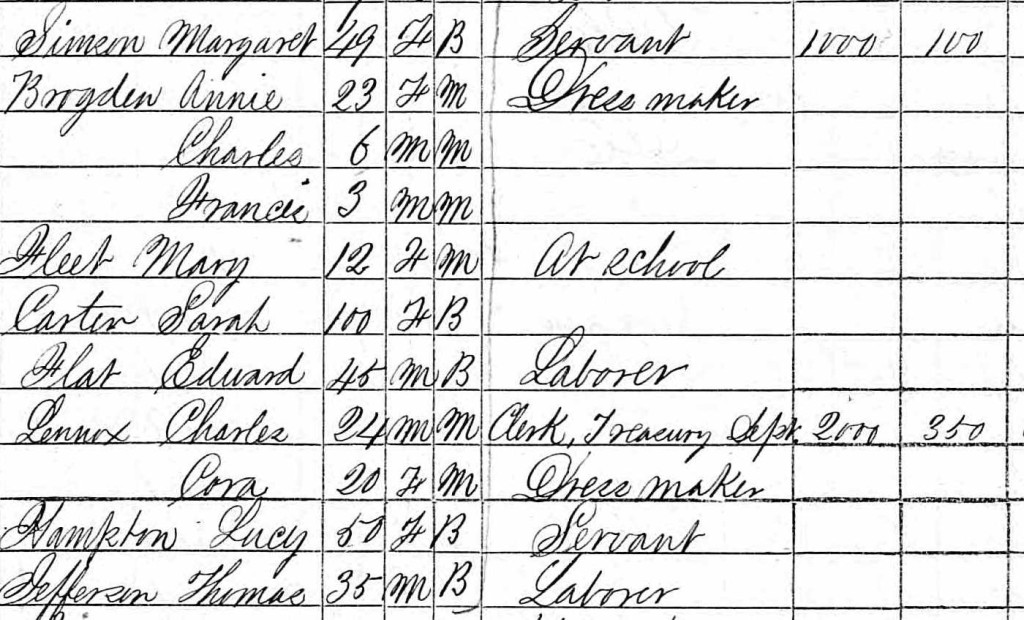 In 1873, Margaret opened an account with the Washington D.C. branch of the Freedmen’s Bank. She named her new husband Perry and her children: 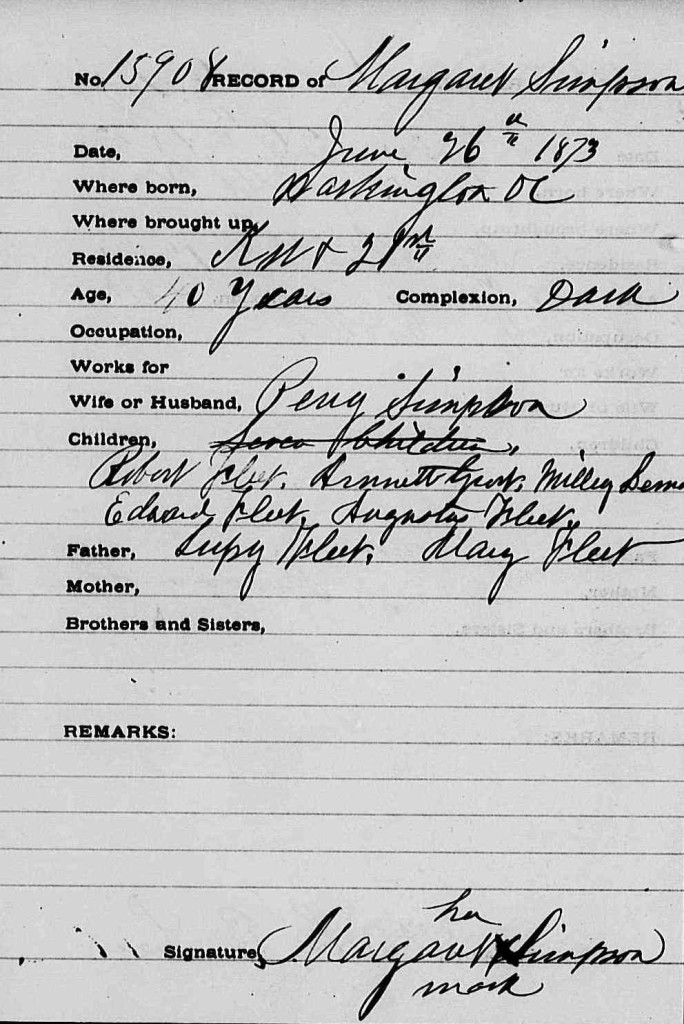 Children Fathered By Whom?

Most of Margaret’s children can be tracked through their marriages, vital records, land records, burial records and city directories in D.C. The death certificate of her daughter Annett names “Greg Jarvis” as her father.

In these records, Jarvis is described as from Mexico (1850) and also New Mexico (1860). New Mexico was not yet a state; it was the Territory of New Mexico. The Treaty of Guadalupe Hidalgo ended The Mexican War.

It is unclear whether Gregory is from the Territory or the country. Either way, I wonder what would have brought him to the nation’s capitol?

Jarvis was described as a mulatto in 1850 and as white with an Irish wife in 1860. What his racial background is unknown, especially given the made-up and ever-changing racial categories.

This man apparently headed two families: one black, one white. Documents tie him to at least three of Margaret’s children.

A 1911 mortgage executed in Montgomery County noted Margaret’s date of death and listed all of her heirs living at the time: 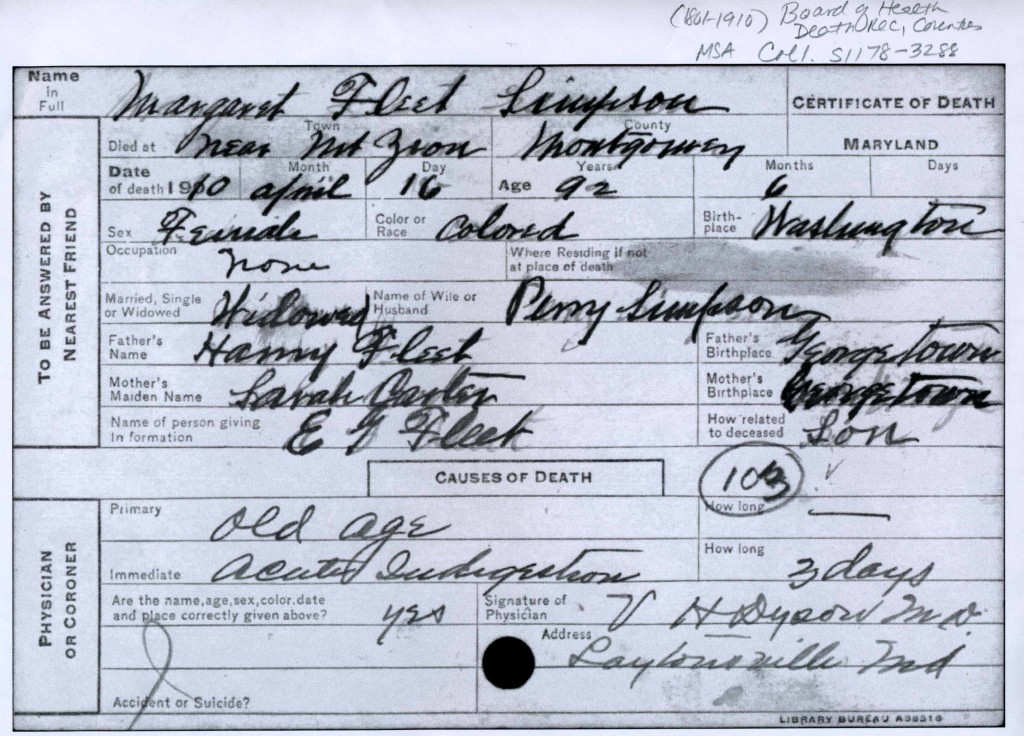 Margaret’s life was pretty interesting and only goes to prove that sometimes veering off-course is absolutely well worth it.

As an added bonus, two of Margaret’s daughters married two brothers, Charles and Beverly Lemos. Read about the amazing thing that happened to them.