Many of our artificial brick walls are caused by our inability to extract every clue from each source. One of my favorite suggestions is to tell people to Follow the Witness.

Many of the most common sources we use, such as deed records, probate records and marriage records, are legal documents that in many cases needed a witness.

In some cases (most notability with marriages and execution of probate duties) a person had to post bond. That’s the “co-signing” of today.

Who are the people most likely to serve as a witness or guarantee a bond? They are most likely family members or very close friends.

Put another way, you might co-sign a loan for your daughter; you probably wouldn’t do it for the guy who lived down the street that you barely know.

I’ve discussed before the need to use the cluster approach in genealogy—what Elizabeth Shown-Mills calls the FAN club.

That’s the concept of not just researching your direct ancestors, but expanding your research to the group of Family, Associates and Neighbors that your ancestors had. Why?

Because it increases your chance for success. It operates on the principle that most people lived, moved, associated, worked, worshipped and married in groups, not in isolation.

To that end, never forget to notice those witnesses. In the example below from Tippah County, MS in 1888, the top portion of the record is a marriage bond: 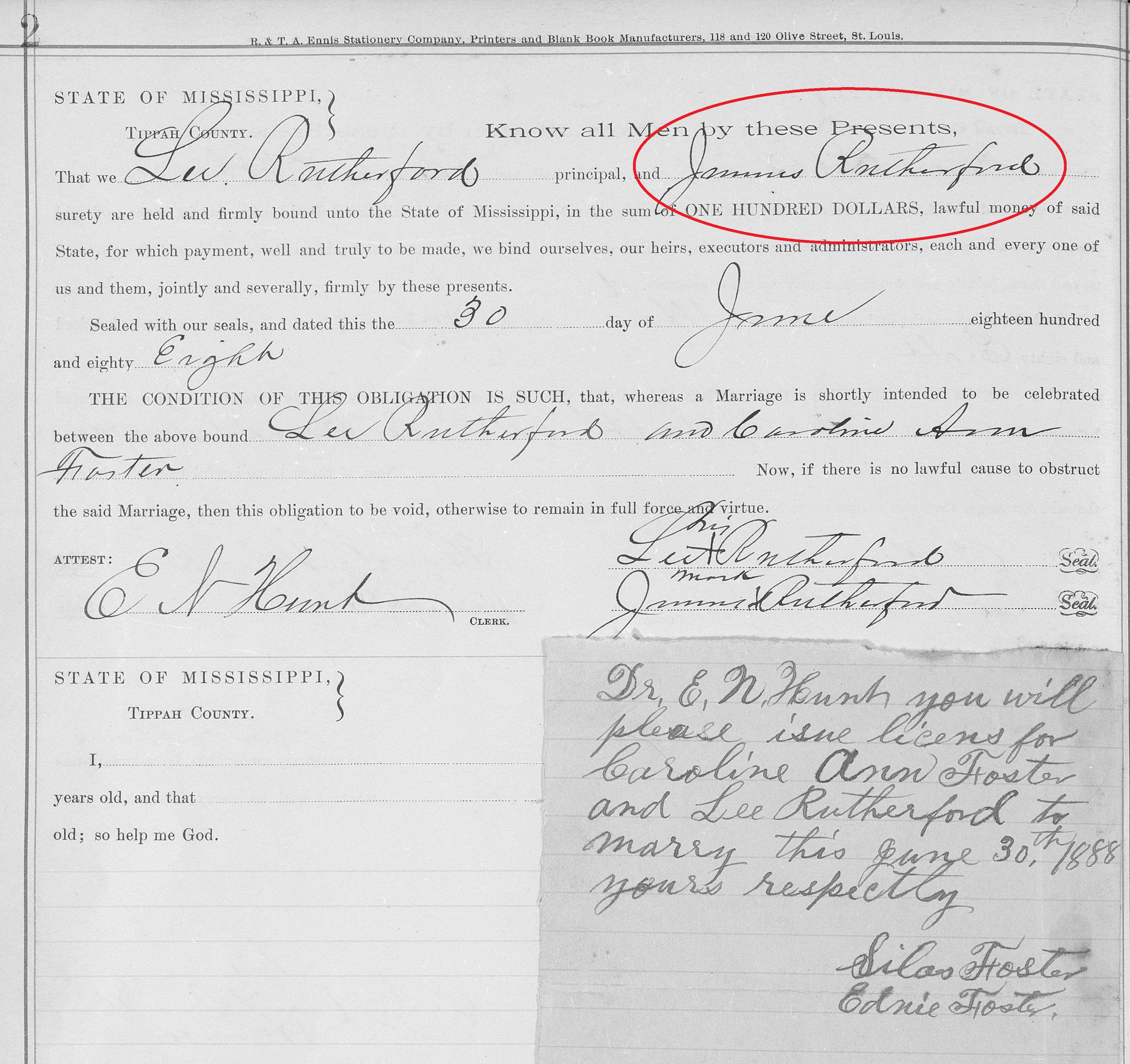 Even though it doesn’t have the word “BOND” emblazoned across it, once you read the words, you realize that’s what it is (it’s that little word ‘surety’). I posted on this topic before, the need to understand the different kinds of marriage records.

WE can see in the document that James Rutherford signed a bond with Lee Rutherford for his marriage.

You’ll have to go to other records to confirm the relationship, but my guess is that James is Lee’s brother or father. This record also preserves a wonderful note from what presumably are the bride’s parents, Silas and Ednie Foster.

In the 1879 marriage record below from Decatur County, TN, we see one “G.W. Holt” signing a bond for James Tall’s marriage to Mary Garrard: 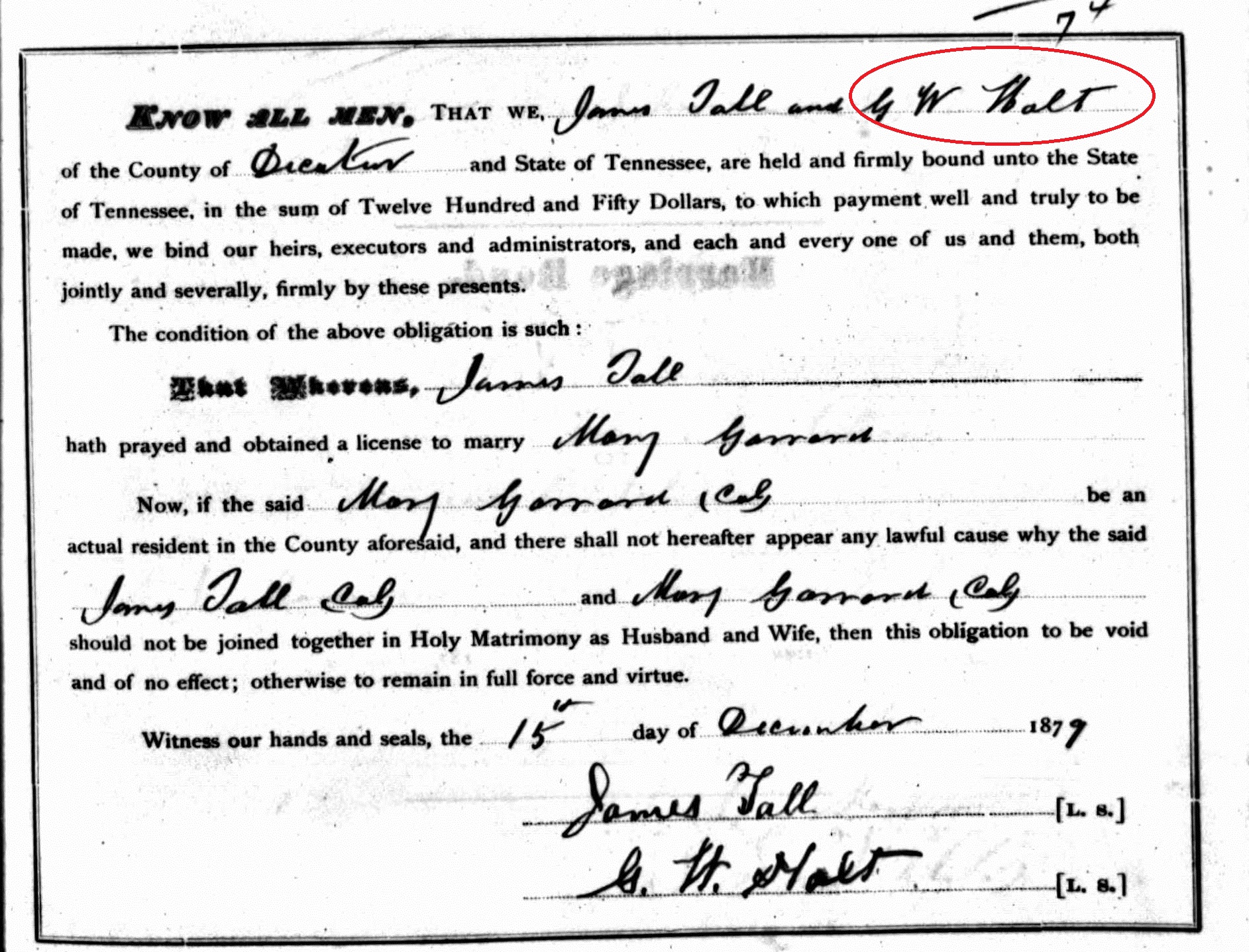 Even though George’s Holt surname does not suggest a relationship, we’d want to research him as a part of the “cluster” for James Tall. It’s no surprise they are neighbors in the 1880 census: 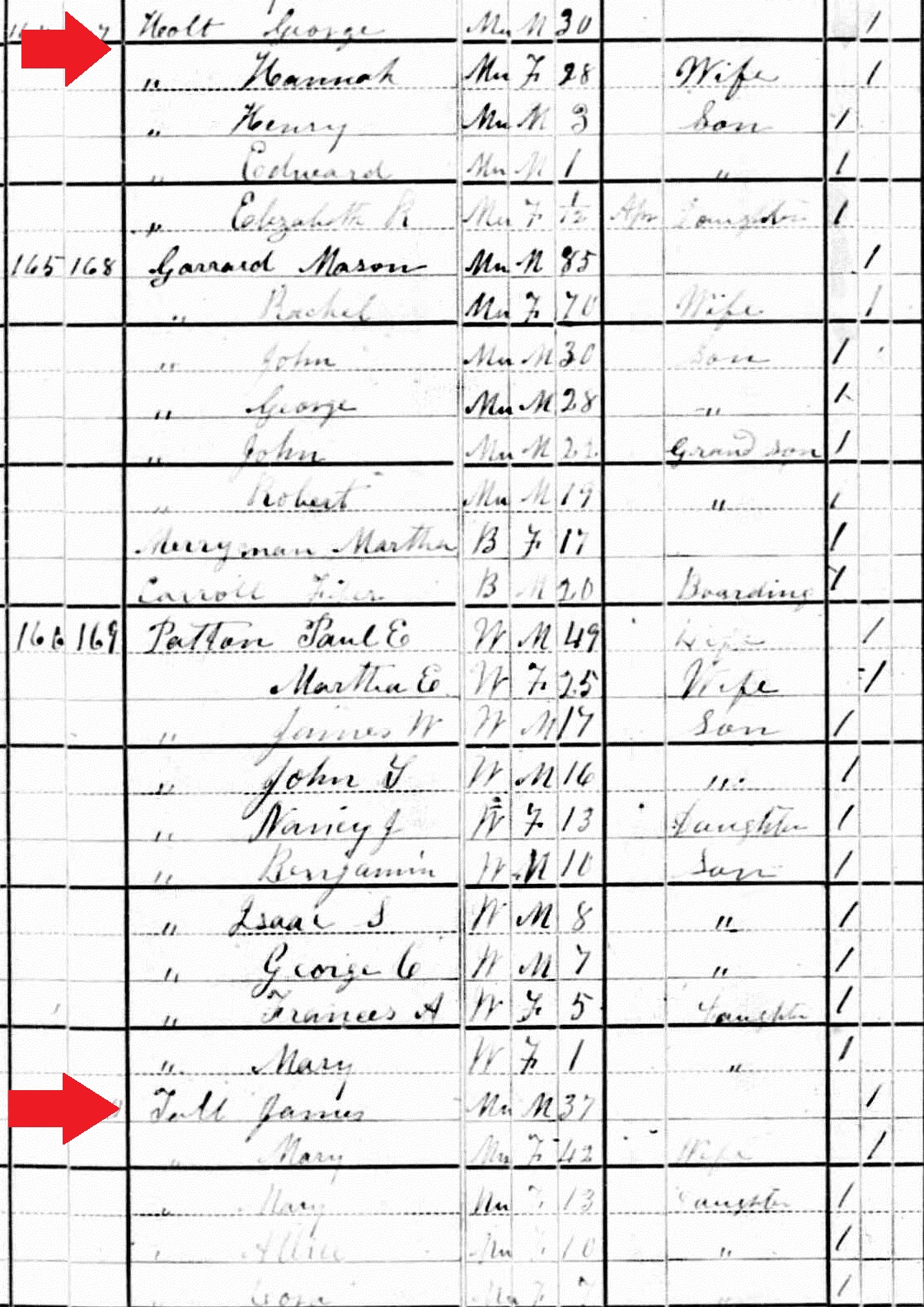 Turns out both men married daughters of Mason Garrard. That’s the “cluster” at work.

But be careful: many of the marriage record books that clerks used had pages that looked something like this one below from Richmond County, GA in 1875: 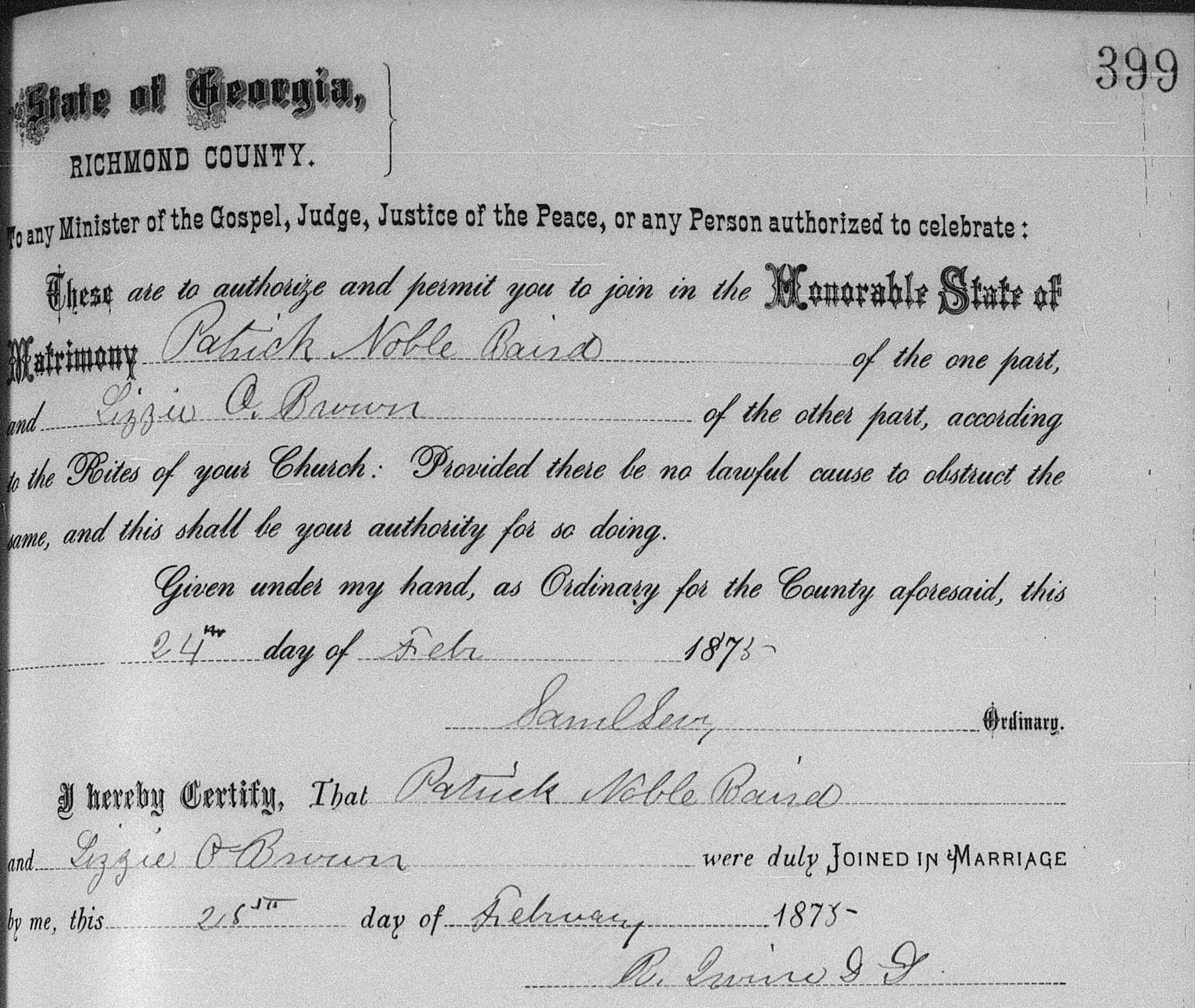 When you read it, you find that each couple’s entry is a marriage license and then a return from the minister (at the bottom where it says ‘I hereby Certify’) stating the actual date the ceremony was performed.

In this case, you’d want to see if marriage bonds or the application for a marriage license were kept in a separate book or set of loose papers.

As an example from deed books, shown below is the last page of an 1877 Somerset County, MD deed: 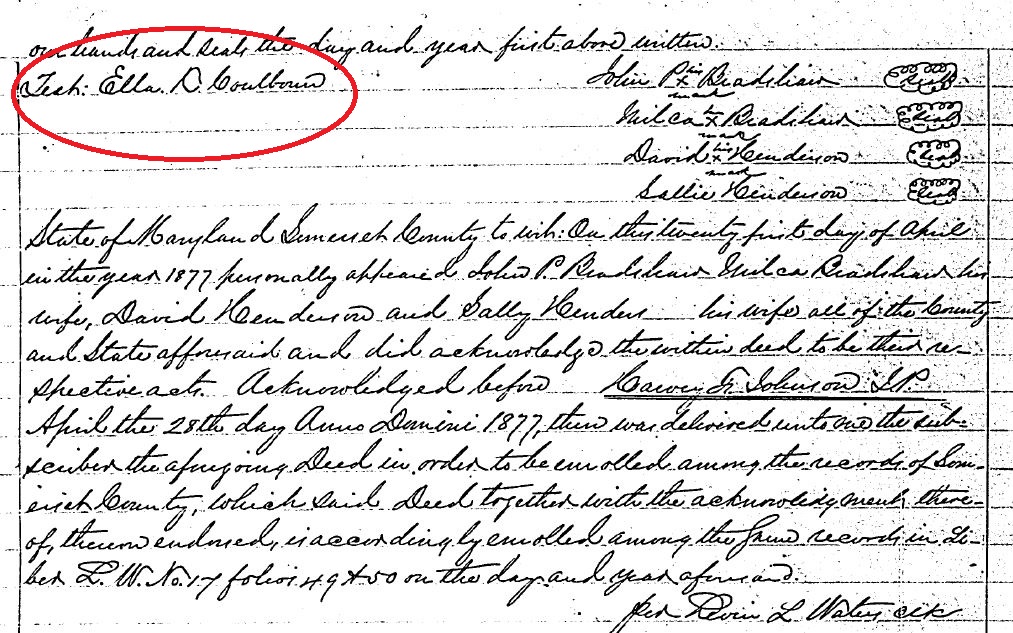 The witness here—where you see the word “Test.”—is “Ella D. Coulbourne.” What is her relationship to the parties in the deed, who are Bradshaws and Hendersons? You’d want to research that.

But again, beware!–there are many marriage records and deed records where the court clerk also serves as the witness.

You’ll need to check a few pages in both directions from the record of interest to ascertain whether that is the case, such as in this 1883 Somerset County, MD deed:

You can see that witness “J.T. Warfield” is the same Justice of the Peace who certifies the deed.

Witnesses have played a key role in some of my biggest genealogical breakthroughs,  such as discovering the connection between my great-grandfather Mike Fendricks and Dee Suggs.

You can see Mike Fendricks below guaranteeing a bond on Dee Suggs marriage license: 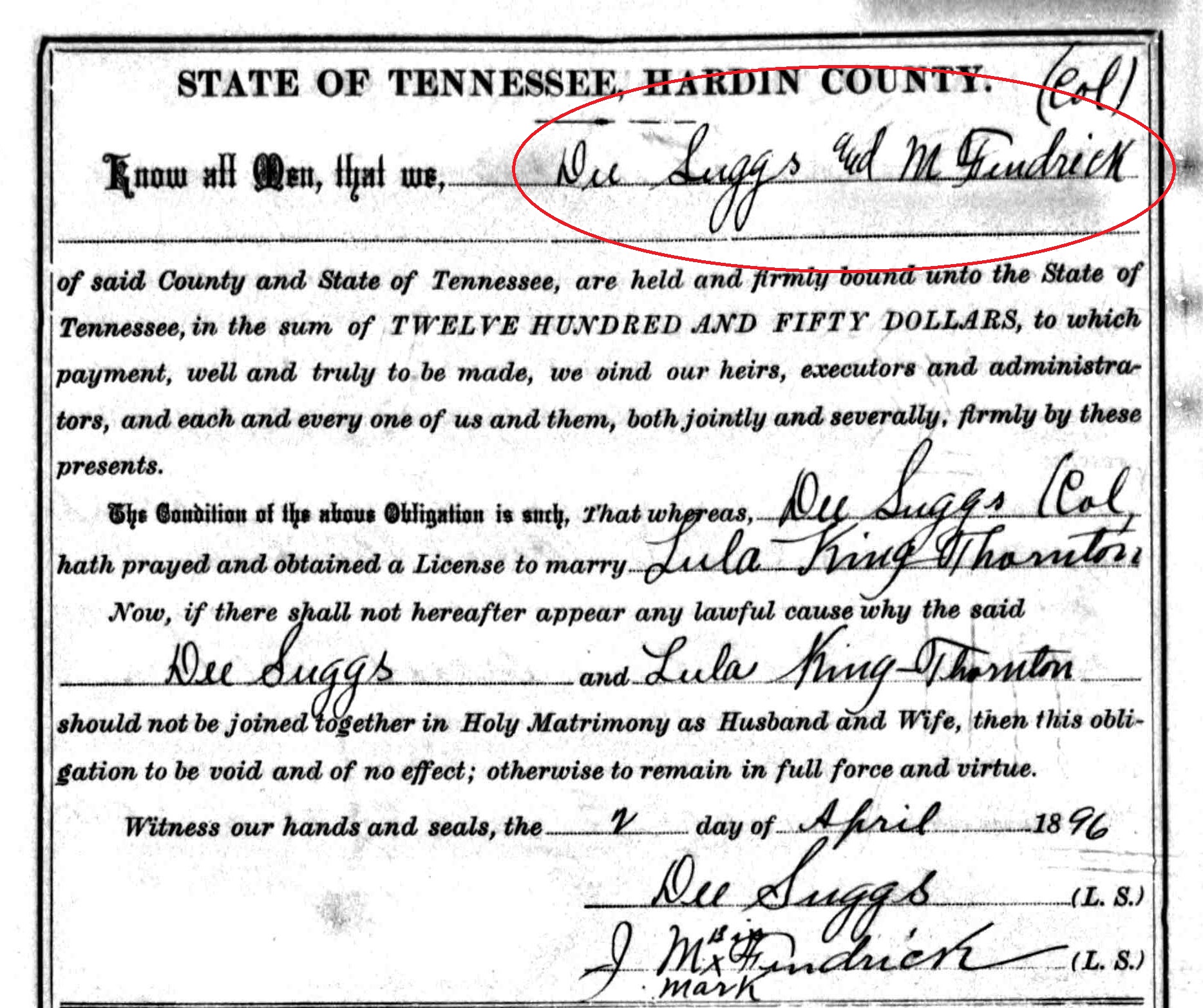 So get in the habit of scrutinizing your sources. Look for and then follow the witness. He (most likely a he) may be just the clue you need to figure out the family of origin or the family that a daughter or sister married.

He may be just the neighbor to lead you to where your family migrated to or from.

In the comments, I’d love to hear examples from readers about any discoveries made where witnesses were a key piece of evidence?