Their records are among the most popular for those researching African-American roots.

Established by Congress in 1865, the Bank was primarily designed for use by the nation’s recently freed four and a half million formerly enslaved people.

It eventually grew to have 37 branches in 17 states and Washington, D.C.

While a laudable effort, the Bank closed its doors after nine years due mainly to corruption and fraud.

The National Archives in College Park, MD, holds the original bank records. Their website contains a general information as well as a lengthier article about their use.

The records are comprised of three general types: Administrative Records, Registers of Signatures of Depositors, and Indexes to Deposit Ledgers.

The Registers of Signatures of Depositors are the richest collection (genealogically) and have been digitized.

Both Ancestry and Heritage Quest include databases of Freedmans Bank registers. Most researchers type their ancestor’s names into the search template, and finding nothing, move on to other records.

I’d like to suggest taking a closer look at these records. We miss all kinds of important information in these records if that is our approach. There is so much more to find.

After searching for known ancestors, type your research county and state in the “birth location” search template. Leave everything else blank.

The database will return people born in your research county. Lloyd Beckett, in the card below, lived in St. Thomas Parish, South Carolina.

But he was born in Montgomery County, Maryland: Lloyd was likely sold South as a slave during the domestic slave trade.

I want to also suggest an alternate strategy of *browsing* these records. Find the bank branch nearest the location of your ancestors.

Browsing Freedman’s Bank records offers a glimpse into the lives of formerly enslaved people. It also provides insight into other aspects of slavery, such as kinship networks.

Many cards include the names of relatives. Substantial information can be drawn about not just individuals but the entire community.

Of course, the content of the cards was largely determined by the person who was filling them in. Some bank employees wrote sparse information about the depositor while others filled every space on the card.

To browse these records, look to the right side of the screen on Ancestry (on Heritage Browse it is on the top). Then choose the correct dropbox for your research state and year.

Here are a few examples of what you might find:

Leah Calhome of Alabama, says she was born on the “Easter[n] Shore of Maryland” and laments the siblings she left there: Henry Somers of Memphis, Tenn., was born in Rappahannock, Virginia, and “sold from Va when 5 years old.” He was raised in Fayette County, Kentucky, then “was sold from Fayette Cty to Smith [Cty] when his youngest child was a baby.”

His wife Rhody died in Kentucky “5 years before the war.” He could not recall the names of his siblings.

He named parents Phil Shirley and Matilda Stencil. Henry is not using either of those surnames: Born in North Carolina, Mingo Steele lived in Huntsville, Alabama. He was “removed to Huntsville” when a boy.

His mother was “taken away from Huntsville” when he was a child and he had “not heard from her since.”

He had “not heard from his father since he left North Carolina.” His parents were Ned and Hannah: Miller Featherston of Alabama was “took to Miss. ten years ago” and made her way back to Alabama. She “was parted from her husband ten years ago:” Born in West Virginia, Samuel Edwards of Alabama “had 4 brothers but don’t know if any of them are living and one sister but can’t say whether she is living or not.”

His parents were Bailey and Rachel. He also served as a soldier in the war in the 42nd Regiment, Company E: 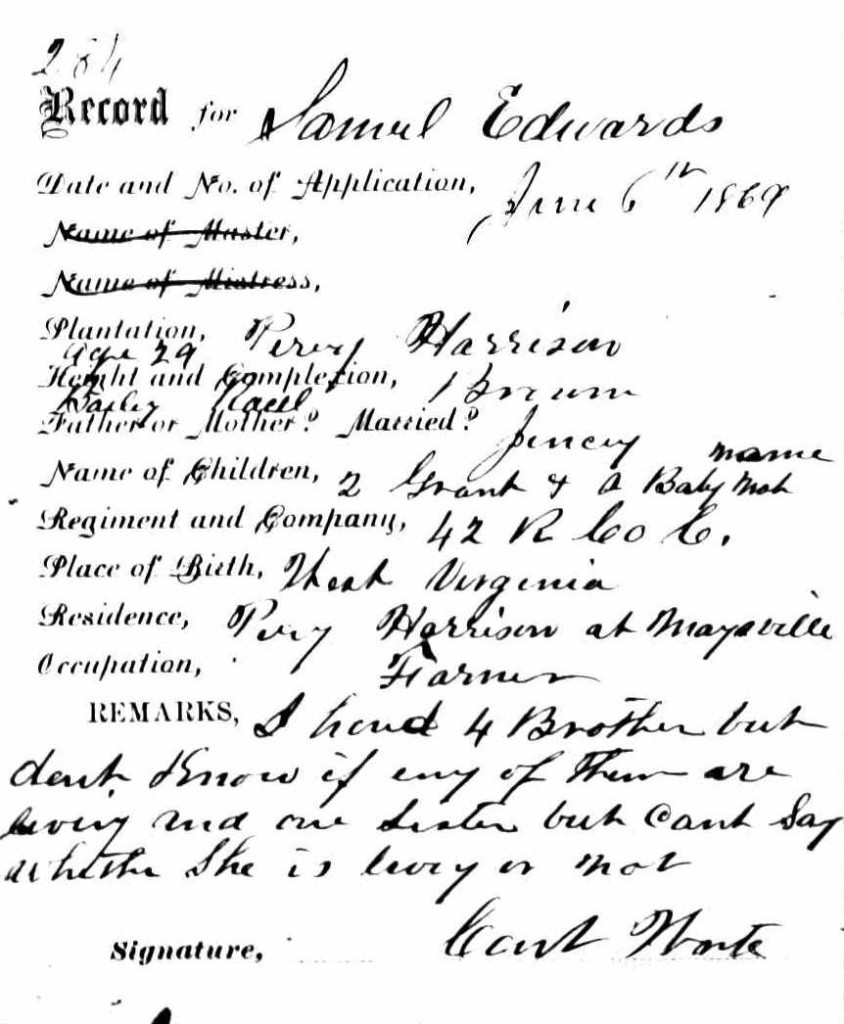 These cards illustrate the tragic consequences and frequency of slave sales. They especially highlight the fact that young children were often separated from parents.

I talk about these records more in part 2.