Phillip Holt is Not Dead After All

It is amazing what can be discovered when you scrutinize your previous research. Sometimes it’s that new records are available that weren’t before. Other times it’s that your skills are better.

I am quite happy to be my own biggest guinea pig and continue to prove this mantra be true.

In this case, I was reviewing Phillip Holt. Phillip was the brother of my 3rd great-grandfather John W. Holt. Earlier in my research, I’d located Phillip and wife Louisa living in McNairy County, TN in 1880.

I never found them again and thought Phillip died. Death seems to have been my go-to rationale when I couldn’t find someone anymore, LOL.

Phillip married a woman named Louisa (maiden name McClain). She was enslaved on a neighboring farm.

Louisa’s mother Lucinda was living with the couple and their kids in the 1880 census below:

That dreaded 20-year gap between 1880 and 1900 is a notorious black hole where ancestors can easily be lost. That’s enough time for kids to be born and out of the house and you’d never know they existed at all.

We’ve got to be in the business of assessing correct identities, and not just matching names.

Some time ago I found this 1900 census record in Madison Co., TN:

I quickly dismissed this as not being the right man for two reasons. Number one, the wife was Lula instead of Louisa (which really shouldn’t have thrown me off). Number two, the mother-in-law was Emma Rodgers, implying the wife’s maiden name was Rodgers.

It’s good that I decided to look at this more closely. The availability of the Tennessee Death Records database helped to solve this puzzle.

I found Lula Holt’s 1931 death certificate, and it confirmed that her mother’s name was indeed Lucinda McClain. 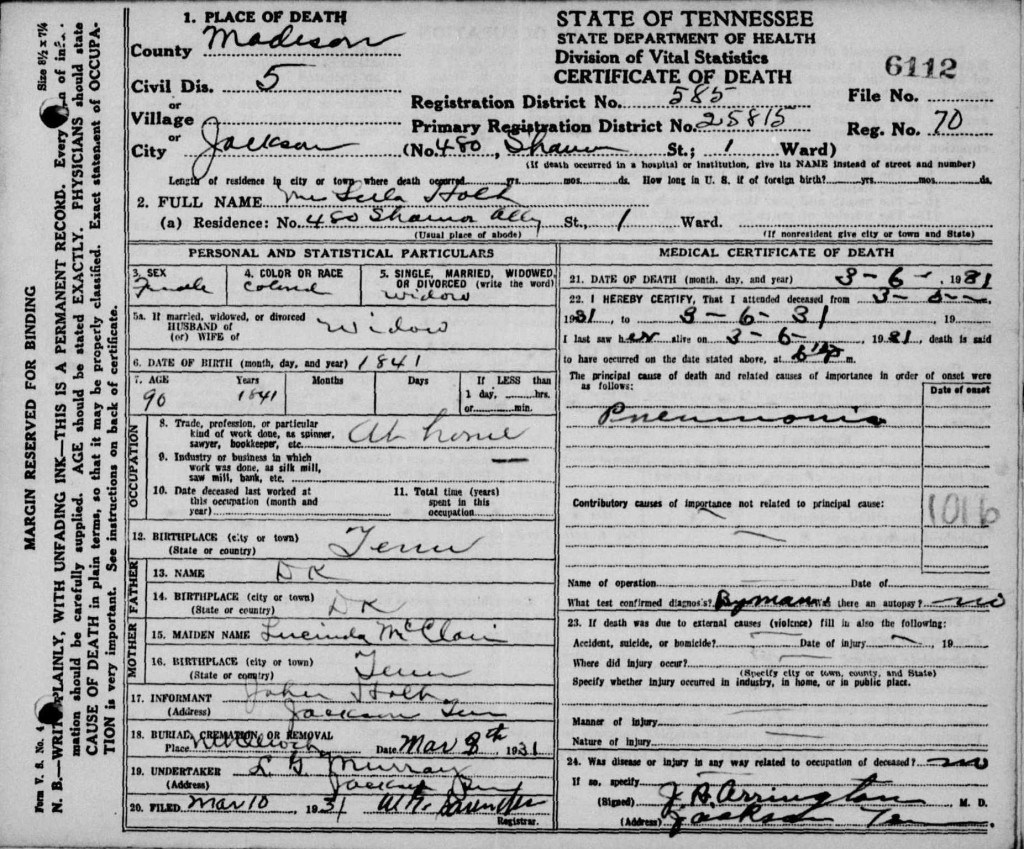 My prior assessment was too quick to assume that the 1900 census information  was accurate; it was not.

Emma Rodgers was not Phillip Holt’s mother-in-law. Who knows why the census reported that relationship. We don’t even know who provided the information to the enumerator.

I’m really excited that Phillip has “come back from the dead.” I was able to isolate his timeframe of death, and track a few more of his children through 1930.

Also, Jackson, Tennessee is a larger city than some of the other places in which the family lived. I’m hoping to eventually find more about him, or better yet, some living descendants.