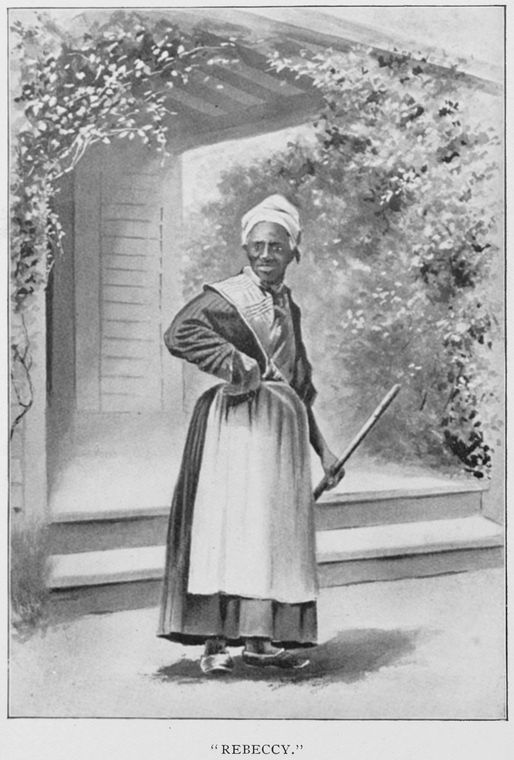 There is a good probability that many of us researching African-American families will find at least one line that was freed before 1865.

In 1860, there were over 400,000 free blacks in the U.S. This map (from the Schomburg migrations website) shows the numbers of free blacks in each state:

Although Northern cities like Philadelphia and Boston had large black populations; over half of all free blacks lived in the South. They lived in cities like Charleston, New Orleans, Savannah, Baltimore and Petersburg.

These cities became the destinations for runaway slaves since they’d have a better chance of blending in with other free blacks. 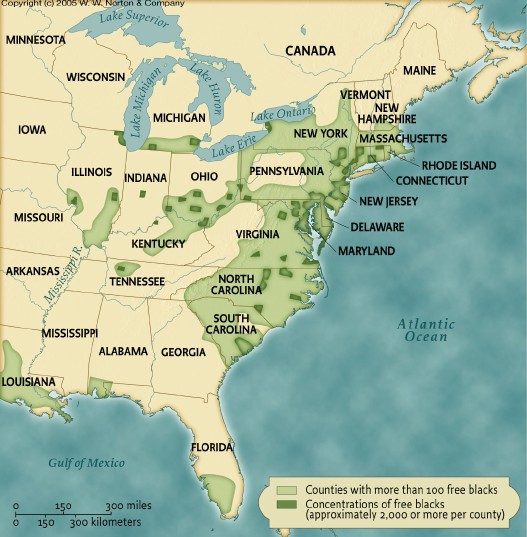 I had free black ancestors living on the Eastern Shore of Maryland. This was not  surprising since Maryland had over 80,000 free blacks by the time the Civil War began—more than any other state.

More surprising was the discovery of a free black ancestor living in southwest Tennessee. She was one of only 37 free blacks in Hardin County in 1850. That was truly unexpected.

The Lives of Free Blacks: References

One of the core texts about free blacks is Slaves Without Masters: the Free Negro in the Antebellum South by Ira Berlin.

Free blacks worked alongside and many times married enslaved people. Widely perceived by the white community as a threat, they were regarded as an enticement to insurrection.

Some of the most famous slave revolts were indeed planned by free blacks such as Denmark Vesey and Nat Turner.

Historian James Horton provides a good scholarly discussion of free blacks. There are also several books written about free blacks who attained great relative success and wealth, such as in Black Masters: A Free Family of Color in the South.

As the number of free blacks grew in states like Virginia and Maryland, state laws limiting their movement and actions increased drastically. Free blacks lived with severely circumscribed freedoms. You will want to research the laws in your specific state.

Examples of some of the laws against free blacks in various states include the inability to:

— vote
–testify against whites in court
–own a dog or gun, and
–assemble in large numbers without a white person present.

Eventually, several states legislated that a freed black must leave the state. Many enslaved people did not want to leave their homes and families.

Still, it’s pretty amazing to read about all that free blacks accomplished given their circumstances.

Start by looking for your ancestors in census records before 1870. Before that year, only free blacks would have been included in the census.

If you discover an ancestor who was free before 1870, next you’ll want to try discover how they gained their freedom.

It’s not always easy ascertaining the method by which an ancestor was freed. As mentioned, many states required free blacks to register their freedom with the county court. This was to prevent runaway slaves from claiming they were free.

The Maryland Assembly put it this way in 1805:

“great mischiefs have arisen from  slaves coming into possession of certificates of free Negroes, by running away and passing as free  under the faith of such certificates”

Therefore, county court minutes are a good place in general to search. That is where I first found a reference to my ancestor in Hardin County.

The court would grant the person a “freedom certificate” that the person had to carry with them at all times.

Some localities kept separate sets of these Freedom Certificates. If you’re lucky, that document will state how the person became free. 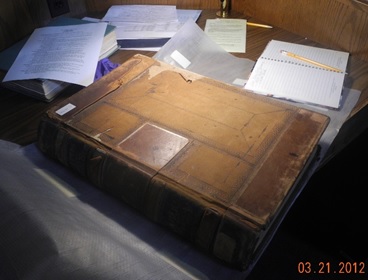 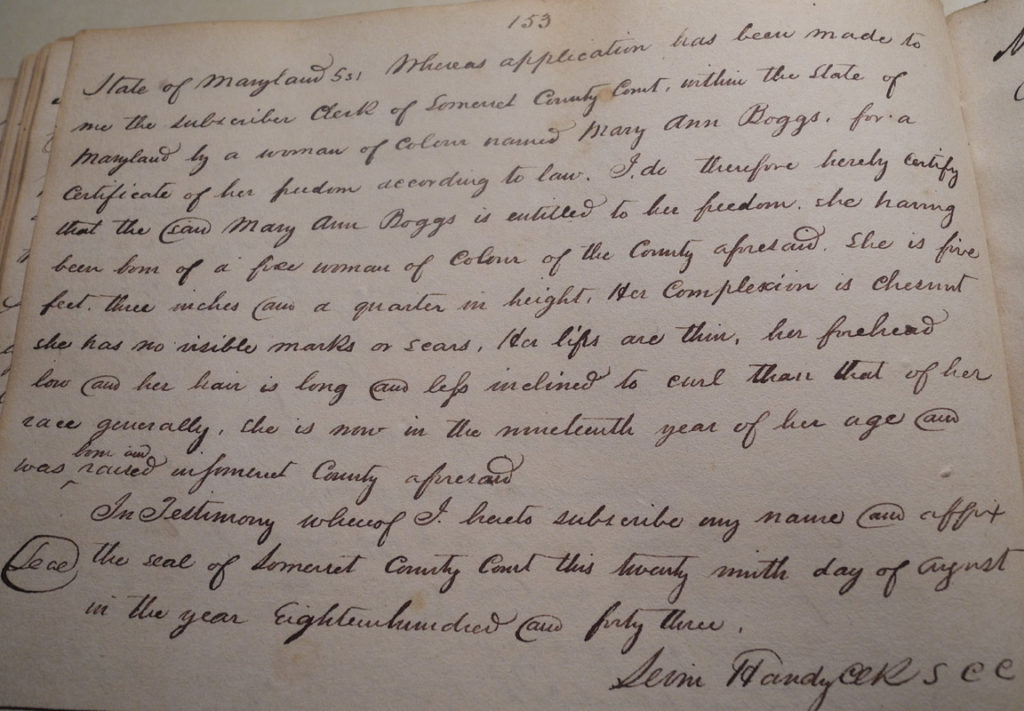 Depending upon the state and county, there may be separate books of manumissions. A manumission is the legal document that frees a slave. Here is an example: 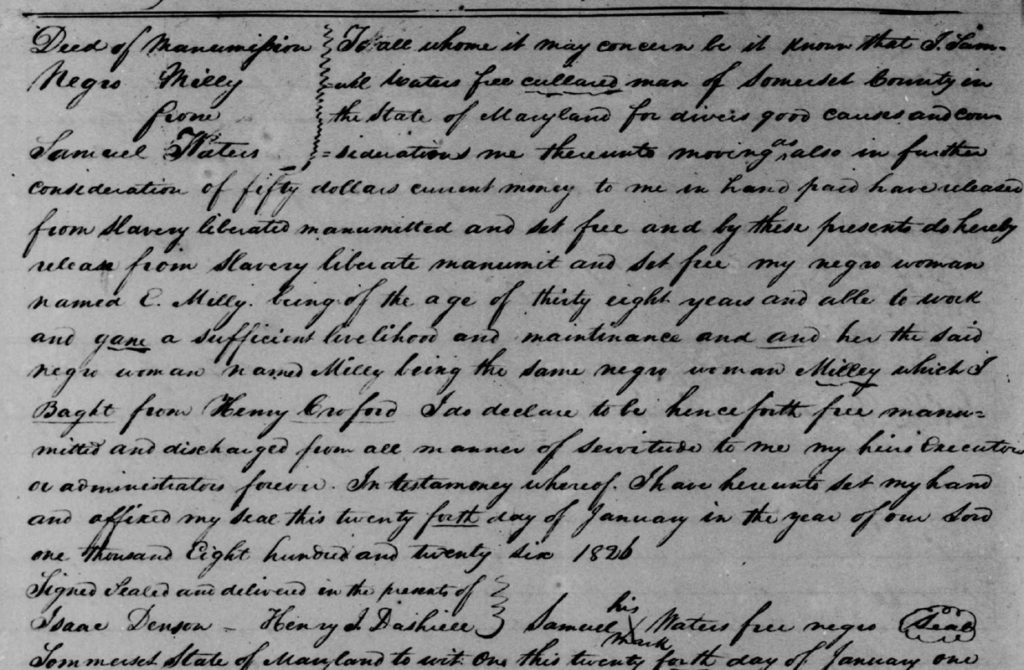 The manumission may be found in the land or court records. Also, many enslaved people were freed through their owner’s will.

Also check for indentures, as many free black children were indentured to whites.

Research whether your ancestor owned land. They may have purchased or been given the land from the person who manumitted them.

They also may be living near the white person who freed them, so use the strategy of cluster research. Free blacks often had a white person who served as “protector.” This would have been important in the world they lived in.

This person would vouch for and support them when they in trouble. You may be able to identify that person by evaluating enough sources.

Manumissions and wills can be more difficult to research because they are typically  indexed by the name of the slaveowner. That means you’d have to know the owner’s name before you could find these kinds of records.

County court records and freedom certificates are more likely to have indexes by the name of the free person. The indexes might contain their entire name (given plus surname).

However, some of the indexed names will just contain a given name, such as Negro Sarah. That complicates the process by forcing us to make sure we are connecting the right “Sarah” with our ancestor who has a surname attached.

In other words, we have to do more work to prove identity.

This was only a brief introduction to another endlessly fascinating topic. If you found an ancestor living as a free black before 1870, share the story in the comments.