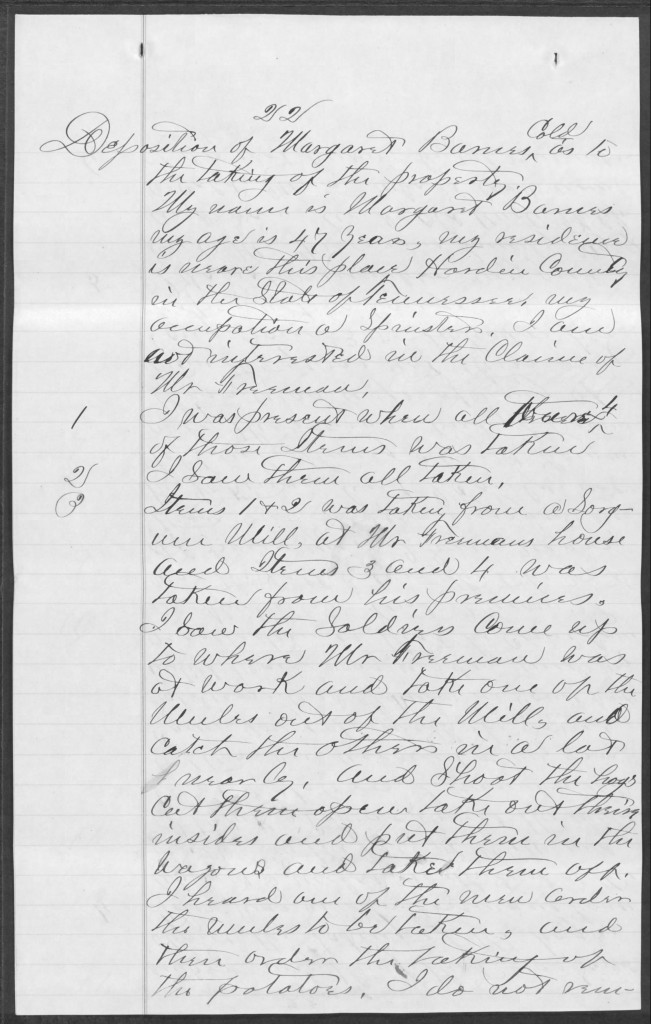 The Southern Claims Commission was created after the Civil War to repay loyal Southerners who had had property taken or destroyed by the Union Army.

Witnesses had to attest to the damages. In many cases, for former slaveowners, their former slaves served as witnesses. Some slaves themselves even filed claims.

The testimony also had to show that the claimant was loyal to the Union cause. In all cases the depositions in these files are valuable to genealogists.

In 2010, I came across a note I’d written about a man named Ben Rush Freeman. According to oral history, he fathered a child (or children) with my 4th great grandmother, Margaret Barnes.

I decided to take a look at Ben Freeman’s file on Fold3 (then footnote). That proved to be a wise decision.

I can’t adequately explain my astonishment as I read Ben’s 45+ page file. My free black ancestor Margaret was one of his witnesses. Above, you can see one of the pages of her testimony.

Margaret testified that hogs were slaughtered by Union troops and that horses and other crops were taken. The deposition gave her age, and stated that Mr. Freeman did not own her, but that she “worked for Mrs. Barnes.”

The only information I had at the time about Margaret was from one court case, oral history, and census records. Margaret was born in the early 1800s, so I had given up the hope that I would find anything significant about her.

Margaret Roberts was a free black woman with a white guardian, sometimes referred to as a “bonded” slave. John Barnes purchased Margaret in 1838, and she appeared in his household in the 1840 and 1850 censuses.

By 1860, Margaret had the surname “Barnes.” John was dead and she still lived with his widow Elizabeth. Margaret and her children are recorded as mulatto.

Margaret last appears in the 1870 census, for the first and only time as head of household.

Margaret’s son, Campbell Barnes, also gave a deposition. His testimony stated that during the war, he left with and joined the Union Army.

He returned after the war. This was new information for me, however, I haven’t found him in any official military records as a soldier.

The claims questionnaire routinely asked black people the name of their owner. Campbell answered that he “was never a slave,” but that his mother “was a free woman and was purchased by John Barnes as a young girl.”

This confirmed information I had already discovered.

This discovery also supports the oral history that Ben Rush Freeman was indeed the father of one or more of her children.

Margaret said that she was frequently sent by Mrs. Barnes over to Mr. Freemens. As we know, children require that their parents be in close proximity.;)

Prior to 2010, Southern Claims Commission files weren’t online. They were difficult to search in person at the National Archives. More importantly, the published indexes to the claims did not index the names of the witnesses!

So, I didn’t think to view Ben Freeman’s file until I understood the value of cluster research.

It is no surprise that many of Ben’s close family members and friends also filed claims. These files contained a gold mine of family history for Ben’s descendants.

Like every good genealogist, I wanted the records to be about what I needed. As I read Margaret’s words,, I kept wishfully thinking, “Why don’t they ask her parent’s names???!”