The Invention of Race 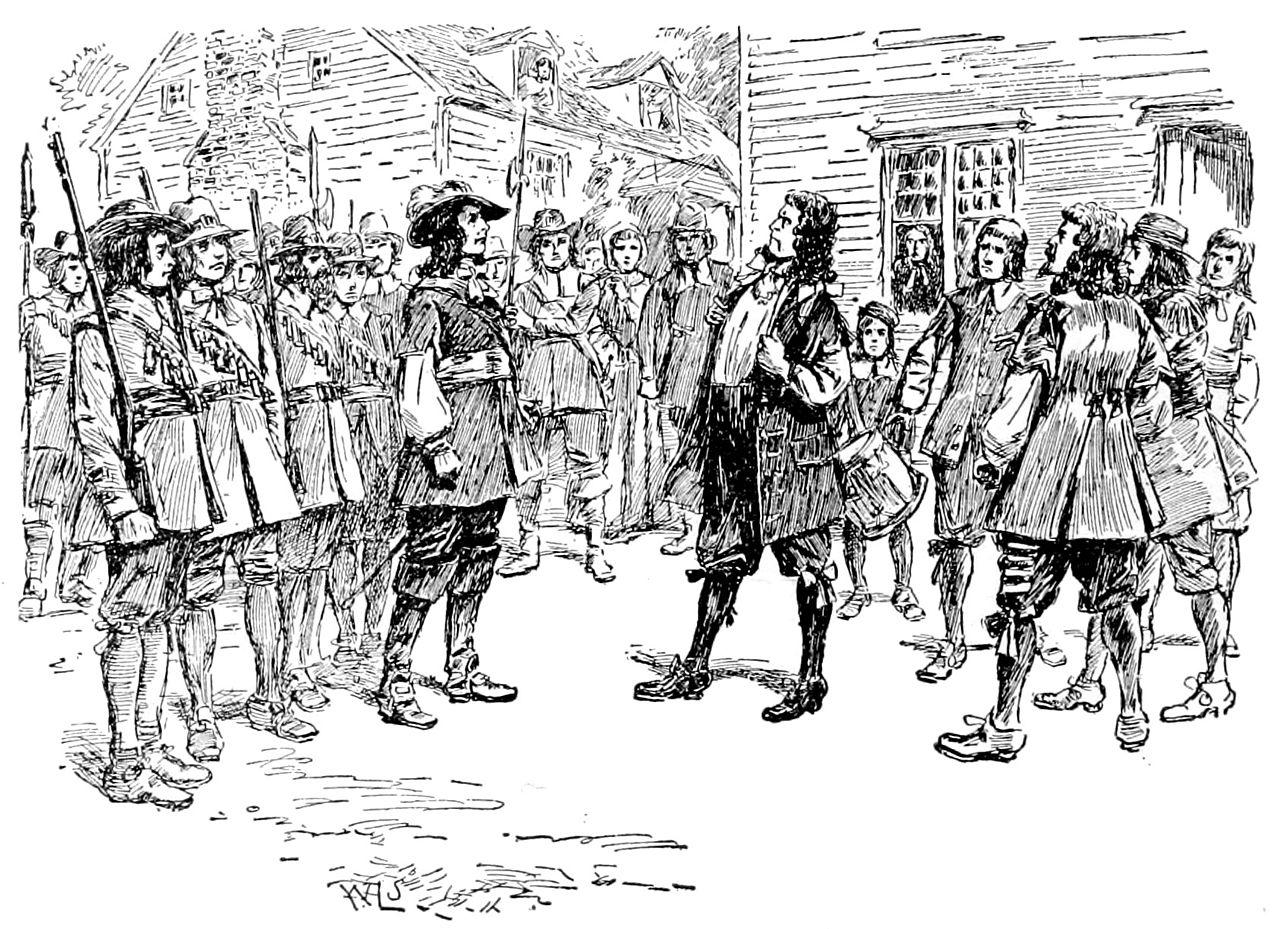 Governor William Berkeley barring his breast after refusing Nathaniel Bacon a commission, during Bacon’s Rebellion in 1676. Engraving captioned “A Fair Mark – Shoot!” From A school history of the United States (1895) by Susan Pendleton Lee

Race is an idea that was invented in the 17th century in the American colonies. Because race is a social construct and not a biological fact, we have to look to the society where it was invented to understand it.

Many kinds of people were in the colony of Virginia in the 17th century: European and African indentured servants and African slaves. There were also European elites, who paid the passage of others in exchange for their labor.

Labor, which their cash crop tobacco desperately needed, was in short supply. Here is a graphic outlining the various New World Labor Systems: 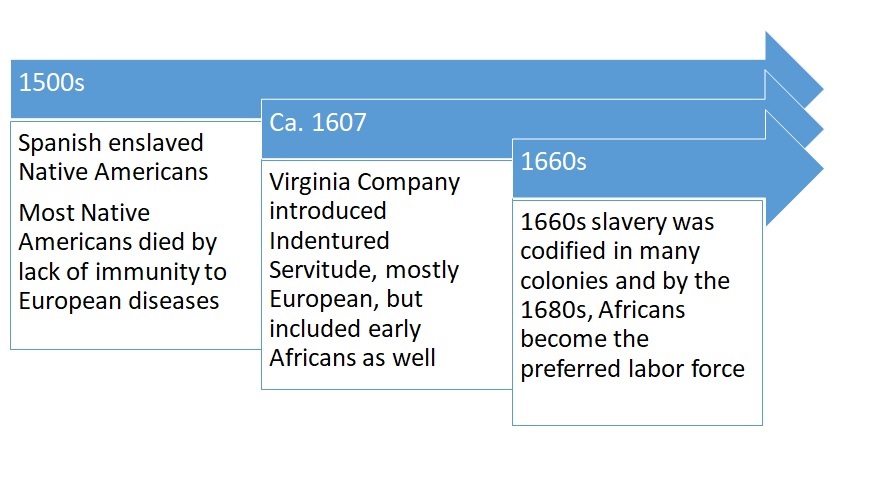 Two additional things about this world are important to know. First, the Irish were never enslaved although the myth continues (however, it is true that European indentured servants were often treated as viciously and violently as their African brethren).

Secondly, European indentured servants had much more in common with African laborers of the time. They lived with them. They worked with them, ran away with them, socialized with them, had children with and married them.

In other words, the economic circumstances of shared oppression bound them together. In an environment free of an ideology of race, which would come later, there would be little reason why this would not be so.

After all, this was a society where the African Anthony Johnson eventually owned hundreds of acres of land, slaves, and indentured servants of his own after he finished his indentured servitude.

Anthony Johnson is important because he embodied the fact that in early colonial Virginia, slavery was not yet legally fixed upon Africans.

What changed all this? Historians agree that Bacon’s Rebellion played a major role.

This disastrous event, which saw Jamestown burned down, hardened the resolve of elite colonists to find a way to divide these groups of people. Thus, the creation of  the idea of “race.” As Michelle Alexander states in an excerpt from her book The New Jim Crow:

The events in Jamestown were alarming to the planter elite, who were deeply fearful of the multiracial alliance of bond workers and slaves…

In an effort to protect their superior status and economic position, the planters shifted their strategy for maintaining dominance.

They abandoned their heavy reliance on indentured servants in favor of the importation of more black slaves…  These slaves would be far easier to control and far less likely to form alliances with poor whites.

It should be no surprise that the aftermath of the Rebellion corresponds with the appearance in the laws of Virginia of ever more stark differences between Africans and people now called “white.” Dr. Jacqueline Battalora reminds us this term appeared in Virginia law for the very first time in 1681.

It should be no surprise that between 1680 and 1700, the importation of African people into the colony increased by more than fivefold.

Think about that. The history of most African-Americans in what is now America stretches back far earlier than the great majority of those descended from mostly Europeans. (See to the chart below, from the wonderful African-Americans migrations website:) 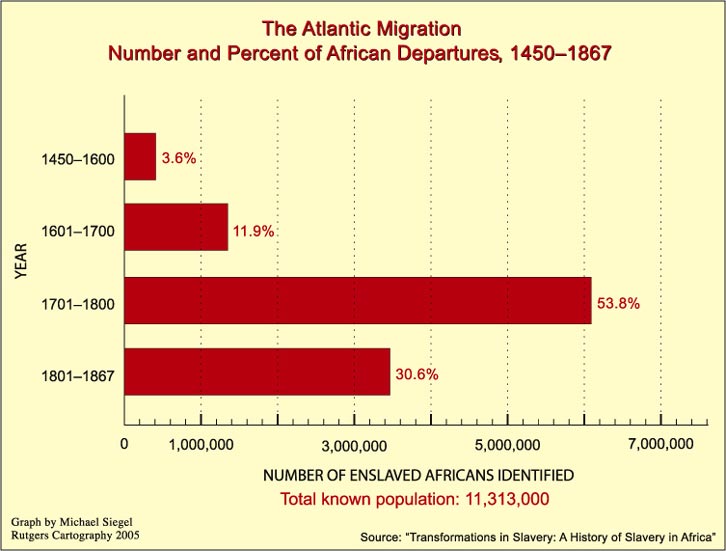 So after the 1680s, the word “white” began to be used more and more to refer to European colonists in official documents and laws. As “whites” gained new rights, people of African descent had fewer and fewer rights and fewer avenues to freedom.

This eventually led to poorer “white” colonists aligning themselves with the colonial elites. Bound together in their “whiteness,” they began to separate themselves from people of African descent, who began to find themselves trapped in perpetual slavery.

Why Was This Slavery Different?

What else was new about all this? Slavery itself was not new. It had existed for millennia. But there was a critical difference.

What was new in American colonial society was this: the idea that only black people, in perpetuity, were slaves for life.

Greeks enslaved other Greeks. Romans enslaved other Romans. The status of a slave in other slave societies had to do mostly with the bad fortune of being captured in war or punished for a crime. And slavery in those societies was often fluid and included routes to freedom.

In other words, mostly external circumstances governed enslavement. This new ideology of “race” was a brand new idea. The idea that something inside of a person—something unchanging, inherent—made someone a slave.

And that my friends, had never been done.

That is why we refer to the slavery that developed in the American colonies as racialized slavery.

There is so much important history that all of us need to relearn, or even learn, since many of us weren’t taught about the history of the race. We see everyday the continuing and damning consequences of that.

As genealogists, we have a view into history that is unique. Let’s share this important point, because we can’t conquer anything we don’t understand.