I have succeeded in extending Mason Garrard’s history back just a little further. Mason is my 4th great-grandfather.

He was enslaved by William Garrard. I discussed that find in the previous post.

Now I know that Daniel Garrard was the father of the slaveowner William Garrard. This is a classic case of enslaved property passing down through the slaveowning family.

In a will written March 1812 in Bourbon County, KY, Daniel included the following bequest: 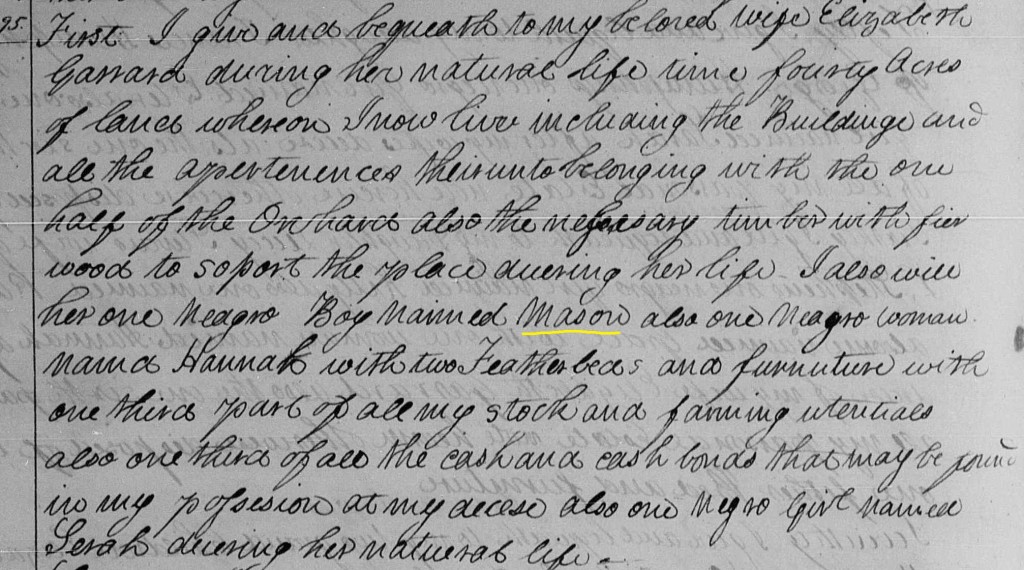 Mason was willed to first Daniel’s wife then to his son William.

Finding this record made me sad. The sadness stemmed from the realization that Mason’s life of labor was used by three generations of this family. First to Daniel and then to his son and grandson.

I don’t know the name of Mason’s mother and father, but perhaps they were enslaved by this family as well.

Daniel’s inventory (sadly, not like this one) is typical of one of the biggest brick walls in slave research; there are no family groupings:

I want to believe that Jane perhaps is the mother of Cyrus and Mason. Perhaps in going to Daniel’s son William there was some attempt to keep her with some of her children.

But I have no evidence for that other than heartfelt desire.

The breakup of enslaved families becomes real–so tangible–in these wills. I look at the list of names  hoping to find a clue to their relationships.

These are all real people who had family members who loved them. Family who never forgot them.

Daniel’s children were bequeathed land, so hopefully the enslaved remained within close proximity.

As I mentioned in the previous post, this was a famous family. Daniel’s brother James was the 2nd Governor of Kentucky from 1796-1804.

He was involved in some of the early political conventions to create the state of Kentucky and was anti-slavery.

He tried unsuccessfully to get gradual emancipation written into Kentucky’s constitution. This family’s prominence helped me, since it means the Garrards are fairly well documented family.

Because of that, I found Daniel Garrard’s father, Col. William Garrard of Stafford County, VA.

(Yes, maybe not all, but many roads do lead to Virginia).

Col. William served in the Revolutionary War, and left a will written 7 September 1787. In his will, he bequeathed 24 slaves to his children and grandchildren. Of particular interest was his bequest to his son Robert:

“the following negroes Doll, Troy and Mason with their increase.”

Now, the 26-year time span means this is not my Mason, but I wonder if this man was his father and namesake? Mason is not a common name.

Maybe I’ll discover Garrard family bibles or papers that further describe their enslaved property. I’m happy to have gotten back this far.

Still, seeing bits and pieces of the lives of my enslaved ancestors continues to be a permanent thorn in my soul.