The challenge to find the last slaveowner for those researching African-American ancestry can be daunting. We need to trace our lines back as close to emancipation as possible. That means the 1870 population census is a critical document.

If you can’t locate your ancestors in 1870, you can use other documents to record their presence in a particular time and place. Voter registration records are a widely untapped source. Although in somes cases they are incomplete, they should always be searched.

I traced  Carole Hyman’s ancestor Arden Hyman to the 1880 census in Edgecombe County, North Carolina.  We could not find him in 1870.  However, searching the 1867 voter registration record for Edgecombe County showed us that our Arden was in fact there: It also showed another Hyman—Zion Hyman—who lived in the same district. Finding those names together uncovered an important link to Arden’s enslaved roots. Zion was likely Arden’s father previously named in one of Arden’s marriage records: By the end of 1866, Radical Republicans controlled Congress and wanted to ensure civil rights for blacks in the defeated south. Unfortunately, President Andrew Johnson (who came to power after Lincoln’s assassination) did not support this agenda.

He wanted to deal with the defeated South more leniently and he believed in the racist notion of the inferiority of black people. Johnson wanted little to no retribution for former Confederates. This clash set the scenes for what would be very familiar to most of us watching Congress today.

Johnson vetoed several key bills, such as like the Freedmen’s Bureau bill and the Civil Rights bill. But Radical Republicans overrode those vetoes. Finally, the Congress decided to impeach Johnson and just get him out of the picture altogether. The House voted to impeach Johnson, but the measure lost in the Senate by one vote.

Congress passed the Civil Rights Act of 1866 (and later 1875) and four Military Reconstruction Acts. This latter set of Acts divided the South into five Military districts. A Union General led each district: 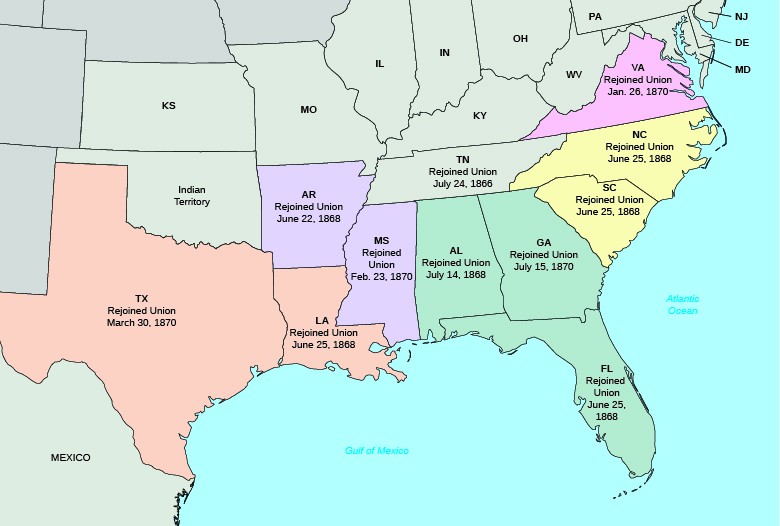 Notice that Tennessee did not go through Congressional Reconstruction since it rejoined the Union prior to enactment of these laws.

Reconstruction, the period between the end of the war in 1865 and about 1877 was a volatile time period that I’ve discussed here before. As a condition of the Southern States re-joining the Union, ratification of the 14th amendment and later the 15th amendment was required. The 14th amendment conferred citizenship to former slaves while the 15th ended slavery (unless convicted of a crime).

Take a walk around the web and read about the battles between Congress and President Johnson.  There’s much more to the story that deserves a post of its own.

The brief taste of voting rights for blacks eventually ushered in the first wave of blacks to serve in the U.S. Congress. It would not last. Violence and intimidation increased against blacks who dared to vote. The Ku Klux Klan and other domestic terror organizations formed. 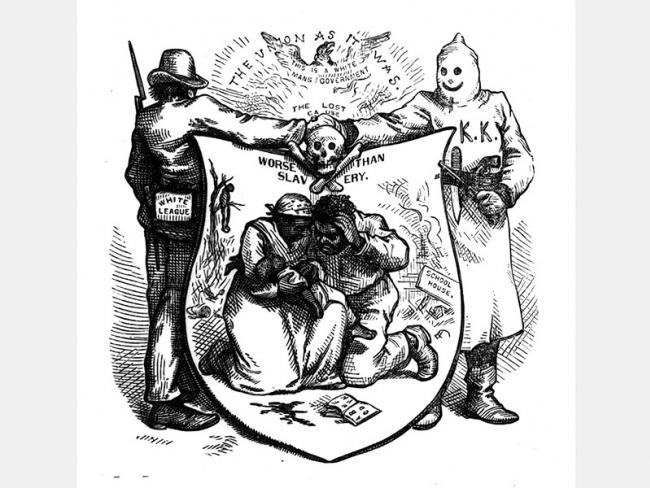 After 1877, Democrats began to take back state legislatures. They also re-wrote their constitutions with laws designed to circumvent the 15th amendment. These new state laws stripped blacks of the right to vote using grandfather clauses, poll taxes, literacy tests and other tactics.

Supreme Court cases such as Plessy v. Ferguson in 1896 and the 1883 cases that overturned the Civil Rights Acts of 1875  essentially closed the door to black voting. This predictably led to the resurgence of white dominance over black lives. By 1900, southern blacks were almost completely out of the electorate.

However, the voting requirement left surviving voter registration records for some of the Southern states (not available for all counties):

Alabama: 1867 Voter Registration.  Searchable online at the Alabama State archives. Some of these include length of time in county. Also see Alabama’s 1866 state census.

Texas: 1867-1869 Voter Registration Lists.   These records document how long the person has lived in county and state and where they migrated from. Available on Ancestry. Someone posted a PDF of these records for Tyler County.

North Carolina:  “North Carolina Extant Voter Registrations of 1867,” by Frances Wynne lists records from 17 counties. This book helped me find the Hyman discovery. Originals should be at the State Archives in Raleigh.

Louisiana: There are references to records available for New Orleans, but no info for other counties in Louisiana.

Virginia: Search by county in the Library of Virginia’s catalog, and search under the heading “Election records.” Some records exist, although many seem to be from the 1880s, 1890s.

Some of these counties have voting registers through the 1880s and 1890s—be sure to check those as well. In various state archives, voting records are often “hiding” under Secretary of State Records. Also, check the online Family History Catalog for your state and county. They have a category called “Voting Registers.”

Related to these records are the poll taxes that many southern states created to try to disenfranchise blacks. If they are available, they are also an excellent source to locate your ancestor between censuses.

In one of my research counties (Hardin County, Tennessee) the tax collector wrote valuable notes beside each name like “dead,” too old,” or “gone.” I found these records mixed in the county court minutes. 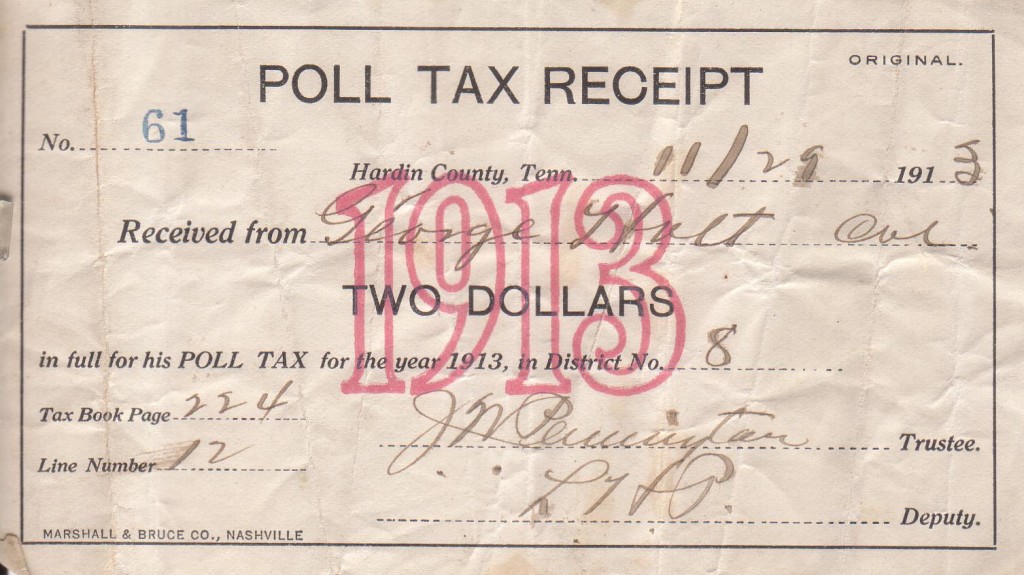 Note: Some of the richest records relating to the violence during Reconstruction are the Congressional hearings about the Ku Klux Klan violence in the South. You can read an excerpt here.