Is The Wife Really The Mother Of All Those Children?

What does that mean? 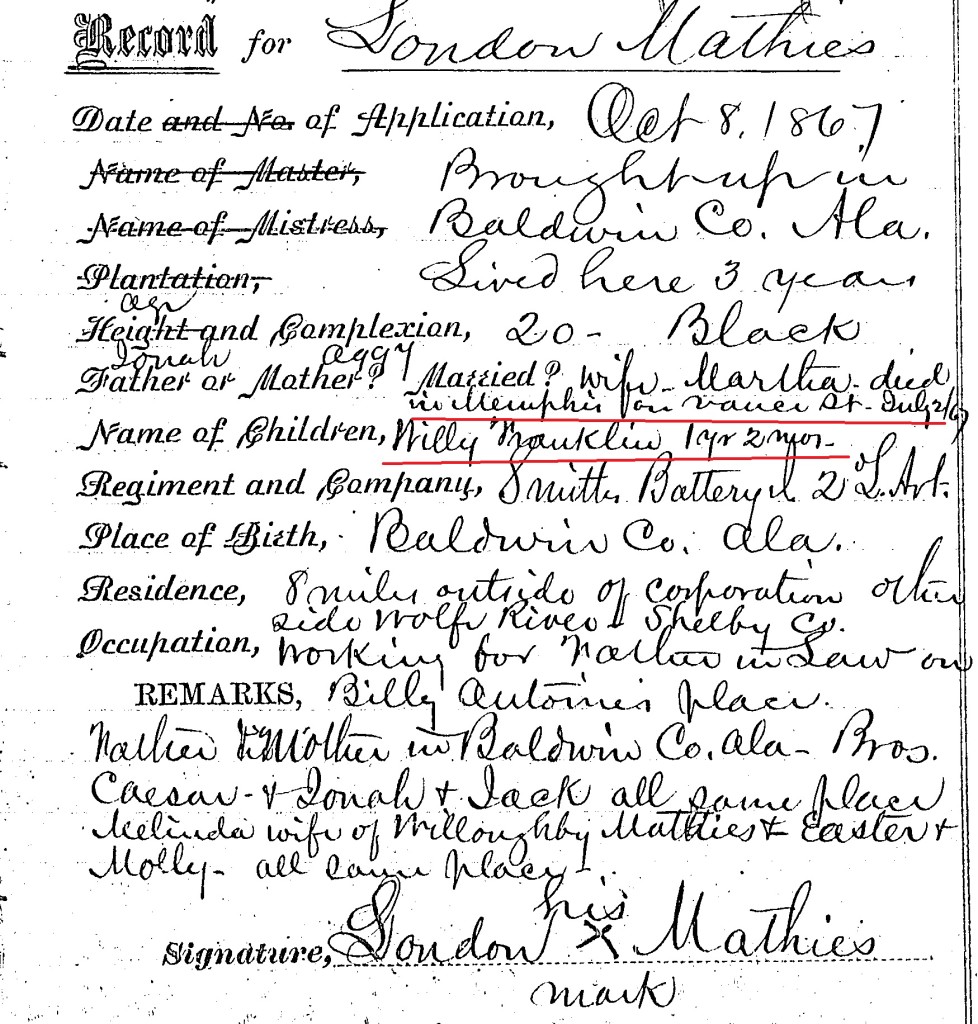 London’s bank card dated 8 October 1867 provides the surprise notation that his wife “Martha died in Memphis on Vance St. July 2/67.” Of course, most cards don’t typically include dates of death, so this is a lucky find.

For children, the card says “Willy Franklin 1 yr 2 mos” which could mean one or two children. But let’s combine the evidence in the bank card with London’s 1870 census household:

In this document, London’s wife’s name is Amanda. With one year old son Jackson in the household, we can probably safely conclude that London remarried and had another son.

What these records *together* show is that Amanda is not the mother of the first son William or as the bank card calls him, Willy Franklin.

William’s mother was probably Martha. If we viewed this census record in isolation, we might incorrectly assume this was a man and a wife and their two children. Of course, we’d try to find London’s marriage records to confirm our hypothesis.

We could also try to find church or burial records that may confirm the death of his wife and perhaps births or baptisms of the children.

Don’t assume that the wife in any household is the mother of all of the children in the household. That relationship must be proven separately.

If you know how to properly extract every clue from census records, you’ll notice that the little M2 means that John Campbell has been married more than once. However, this is his wife Harriet’s first marriage (M1).

You’ll also see that Harriet has birthed two children and two are living. This implies that the last two children are not Harriet’s children (Thanks for the correction, Rolanda!)

Same thing with this third example from Samuel Burrow’s 1910 household:

Samuel’s marriage to Carrie has not produced any children yet; it’s her first marriage and his 2nd (or more) marriage. The two children in the household are probably his from a previous marriage.

Watch Out for This

If it’s the husband’s subsequent marriage, the children are not shown as “step” children because the census records only state the relationship to the head of the household.

If it’s the husband’s first marriage and the wife’s subsequent marriage, and she brings children, the children should be properly noted as “step” children, as they are here:

Here’s the rub: only the 1910 census requires an “M1” or an “M2” designator for number of marriages. And, the “M2” designator means married more than once. It could be a 2nd marriage or a 4th marriage, and it will still be marked “M2”.

All of these differences in what information each census provides is critical to interpreting it correctly. Incorrectly interpreting the census can lead you astray in your research.

It goes without saying that  census records have high degrees of error rates and should be approached with caution. The census enumerator may not have recorded the information correctly. The family member may not have accurately reported their marital status. Even when their husbands were not dead, women often said they were widowed.

It goes without saying that information in the census records should be correlated with other records that illuminate a family.

It goes without saying that people can and did have children before and outside of marriages.

So how can you prove the relationship to the wife as mother of the children? Here are a few ways:

Examine your census records. Ask yourself, for each family unit: Is the wife really the mother of all of the children? The answer may surprise you.