How Many Slaveowners Were in the South?

This is the third in a series of posts (see previous posts here and here) where I am asking us all to consider reevaluating some of our beliefs surrounding slavery. People everywhere like to make the point that:

“Only one in three southerners held slaves.”

Why do people say that? It’s often a part of some argument designed to downplay the size, impact and effect of slavery, especially at the start of the Civil War. Some slavery apologists in the South even said that slavery was dying out.

And the statement is technically true.

But as usual, the devil is in the details. And the mathematical magic of averaging hides what I believe is the more important picture.

The table below shows the percentage of enslaved people in every Southern state in 1860: 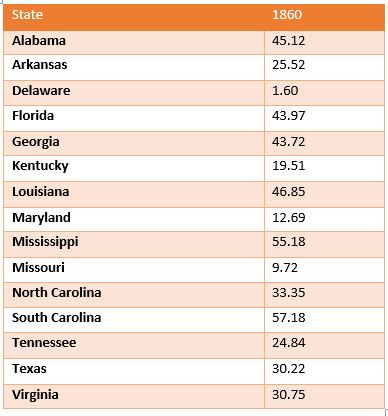 The Upper South states of North Carolina, Virginia and Maryland were right around one-third. But those states had long had a surplus of slaves and had been engaged in selling slaves to the deep South for over five decades by 1860.

We all know that in 1860 it was the Cotton Belt and Deep South states that were the drivers of the slave economy. Let’s not forget about the complicit North.

Thus, in the places that counted, the one-third figure is deceiving and does not tell us what we really need to know. It hides the power and strength of slavery in 1860.

Slavery was growing. Our country had four million slaves in that year. They were worth about $3.5 billion dollars; the largest single financial asset in the economy.

It is that–I would argue–that we really need to know.