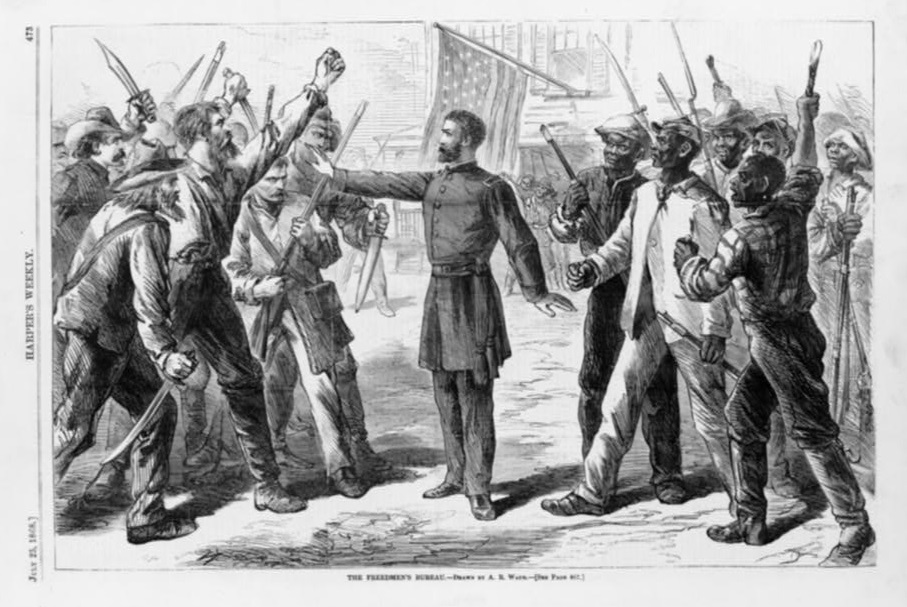 Finally- I found a needle in a haystack. I found my 4th great-grandfather, Perry Simpson, in Freedmen’s Bureau records! I have probably looked through thousands of pages of these records through the years and that is no exaggeration.

I found his name in a Register of Letters Received in the Field Office Records for Maryland and Delaware. A “register” is one of the formats the agents used to document the many letters that poured in, and each register entry provides a brief summary. Perry, who lived in Howard County, was launching a complaint against Delilah Duvall. She had agreed to split shares of the crop with him (presumably in 1866) and after the crop came in, she refused to give him his share of the crop. Sadly, this was very, very common in the years after emancipation:

I’m still searching for his original letter, but I also found his case referenced in the book of Endorsements, which shows his complaint traveling up the chain of command. Unfortunately, in the end, there was no justice for Perry. An excerpt from the Endorsement stated:

nothing more has been done in the case, except to call the attention of the State’s Atty Genl for Howard Co. to the matter who informs us with regret that nothing more can be done, Duvall is very worthless-a civil trial will only subject the man Simpson to more expense for nothing, as no Justice of the Peace in that county will give judgement on negro evidence. They do not refuse to take evidence, but allow him to testify in order to avoid the Civil Rights Bill, but do not allow the testimony to have any weight in making their decision, as reported by Mr. Lands [?] the attorney a true friend of the Bureau

I was surprised at how emotional this document made me. It took a lot of courage and moxie for a former slave to formally complain to the Bureau. Retribution from local whites, including acts of violence and even murder were common. The above outcome references the 1866 Civil Rights Bill passed by Congress. It came up quite  bit in Bureau records, because it was supposed to change one of the reasons why black people were always so vulnerable: their testimony alone could never be used in most states against any whites. When the law was passed, some local law enforcement officials still refused to take complaints from blacks without white witnesses, and the Bureau pressed for prosecution of those local officials. What is shown above is that this particular Howard County official would take Perry’s testimony and allow it in court in order to avoid prosecution under the law, but that essentially it wouldn’t be given any weight. Just like all those cases in the 1950s and 1960s.

I tell you, there is so much today that we simply take for granted. I can’t fathom what it must have been like to live with the fear that anything–ANYTHING–could be done to you with no redress.

I have been predicting that when the Freedmens Bureau Indexing Project is completed later this year, family historians are going to reclaim scores of their enslaved ancestors and lost histories. But we don’t have to wait until then. Many of the Freedmen’s Bureau Records have been digitized and are freely accessible on Familysearch.org. Though the records are difficult to navigate, I suggested a workable strategy to research them back in 2012.

I strongly suggest scrolling page by page through those records. That is the only way I found Perry’s letter. The truth is that the digitization of the Bureau records makes scrolling through a few hundred images pretty easy. Aside from possibly finding a family member, you will learn about the community where your ancestor lived during the transition from slavery to freedom. You will read the stories of former slaves striving:

–to find family members sold during slavery
–to reclaim children being held illegally by former owners
–to be paid for their labor, after employers throw them off the land
–to get legal redress for other crimes against them
–to build schools
–to get their bounty money and pensions
–to find work

…and more. I found myself engrossed in so many of these stories, whether or not they were my ancestors. Tell me in the comments if any of you have had any luck in these records yet. If not, keep looking. Use my find as inspiration;)