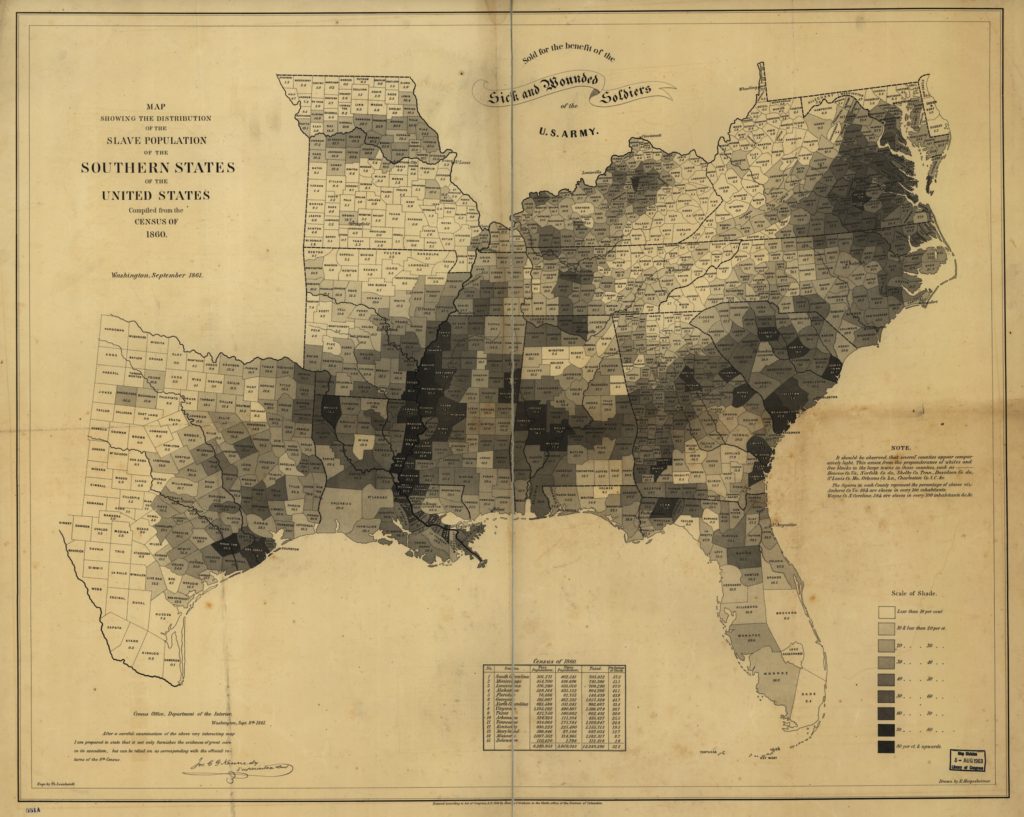 President Lincoln spent a lot of time studying the map above, created by the United States Coast Survey. The darker the shading, the higher the percentage of enslaved laborers.

Slavery maps such as this and several new databases help us understand the experiences of enslaved ancestors.

The Spread of Slavery

The immediate cause of the Civil was actually the spread of slavery. Slaveholders believed they needed to continue to grow beyond their current borders and the President-elect did not support that idea.

Although this static map is valuable, technology has allowed the creation of even better ways of understanding slavery.

Take a look at Lincoln Mullen’s interactive map of the spread of slavery. This dynamic map allows us to have a  better sense of how slavery grew and spread after 1790 (the link above will take you to the website). 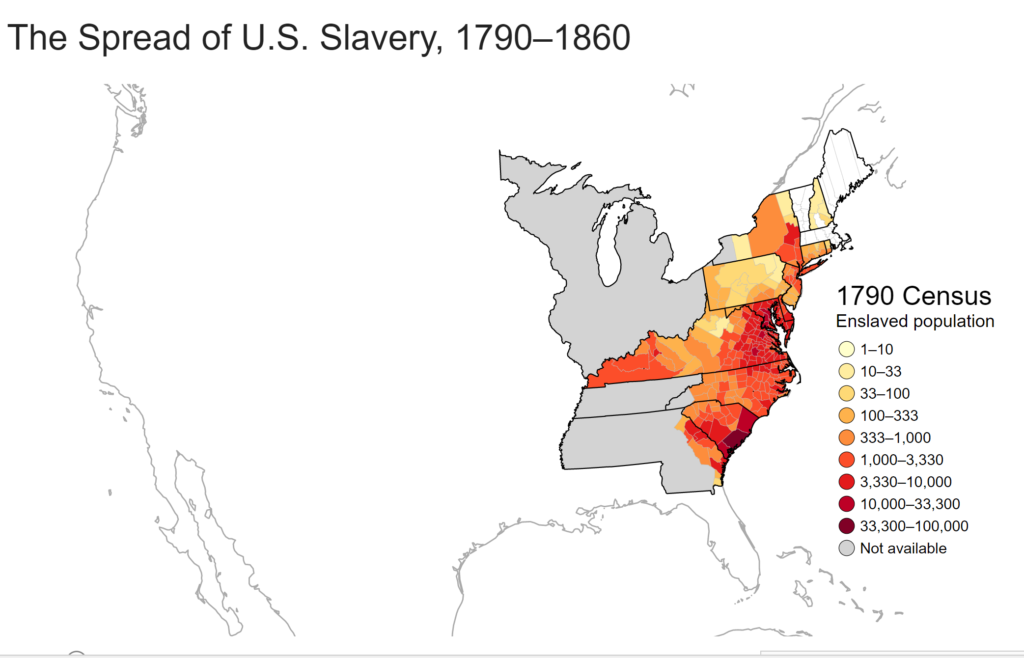 There are other variables that can be mapped, such as the number of free African-Americans. The graphic can show county level data by zooming in on the map.

Take a look at what was happening in the counties where your ancestors lived.

Rothman and Burdumy’s Trans Atlantic Slave Visualization provides another way to understand the slave trade. This site uses a “heatmap”–the shading color changes from green to red over time and indicate increasing numbers of voyages.

Burdumy created a three-part visualization of the historical geography of the Atlantic slave trade. The first map shows the origin of slaving voyages, the second shows where slave ships embarked from West, West-Central, and Southeast Africa, and the third shows where the slavers disembarked their human cargoes in the Americas.

The color spectrum from green to red shows the number and density of voyages cumulating over time. You can zoom in and out of each map for more or less detail.

View the visualizations by clicking the ‘Animate’ button. It’s fascinating to see the changes over time. The English eventually surpassed all other European nations in slave voyages (note also the rise of tiny Rhode Island).

We also see how the bulk of all slaves went to the Caribbean and Brazil. Be sure to zoom in on the maps to see the country and state level changes.

By doing this we can see such things as the specific West African origins of our ancestors.

Last but not least I want to share the phenomenal work of the Visualizing Emancipation project. It’s hard to overstate the usefulness of this massive database.

I tell everyone that emancipation was a process that unfolded over time, unevenly, not an event that occurred on January 1, 1863. The data at this site shows us that process. 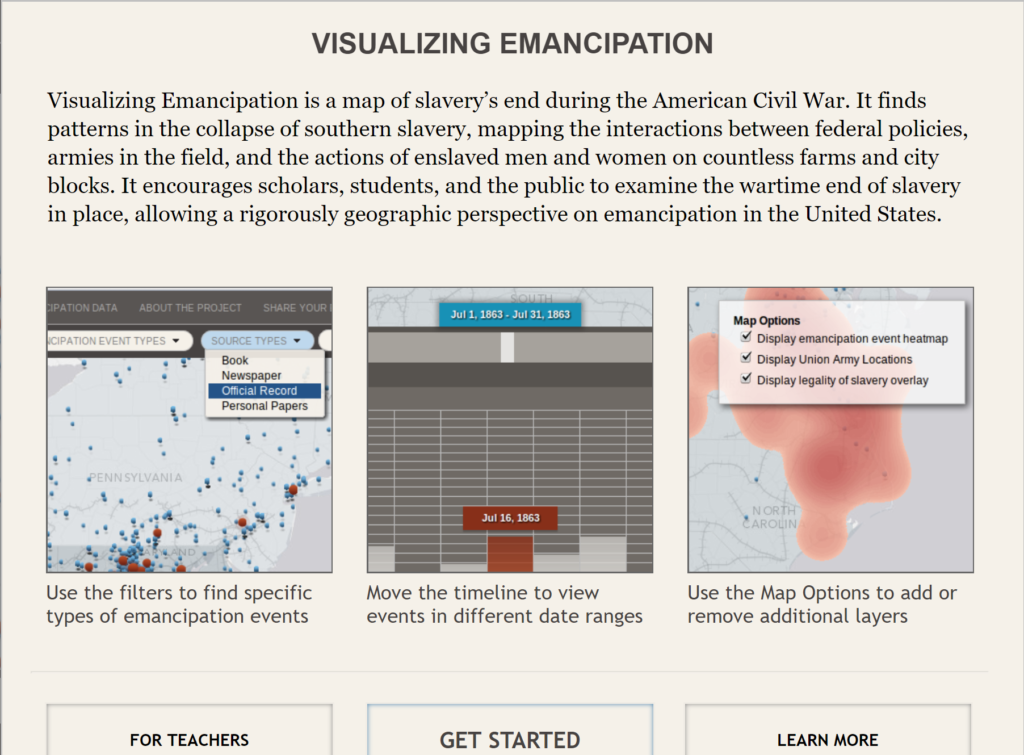 Visualizing Emancipation organizes documentary evidence about when, where, and how slavery fell apart during the American Civil War… it shows how emancipation occurred unevenly across the South, beginning before the first major battles and ending after the end of the Confederacy.

It shows the complex interactions between federal policies, armies in the field, and the actions of enslaved men and women on countless farms and city blocks.

Press the ‘Get Started’ button and take a look at the map and its four options. My favorites are the Emancipation heatmap, the location of the Union Army and the legality of slavery.

You can also change the view from ‘map’ to ‘list’ and see the individual specific events that form the map. You can view by source type (official record, newspaper account, etc.) It’s worth it to spread some time navigating this site.

Emancipation was first and foremost led by enslaved people, who made the war about freedom long before Lincoln saw the war as such. They forced the issue by fleeing to the Union Army in large number AND providing valuable intelligence on the enemy.

Many of us have read the history but there’s nothing like seeing it happen in real time, which these maps allow us to do.

People have a tendency to view events from the past as inevitable, but that’s only because we have the luxury of knowing how the story ends.

History doesn’t happen that way. Every outcome is contingent on a whole host of other things happening as well.

The smarter we all are about the slave trade, slavery and emancipation, the better we can understand the lives and experiences of our ancestors.