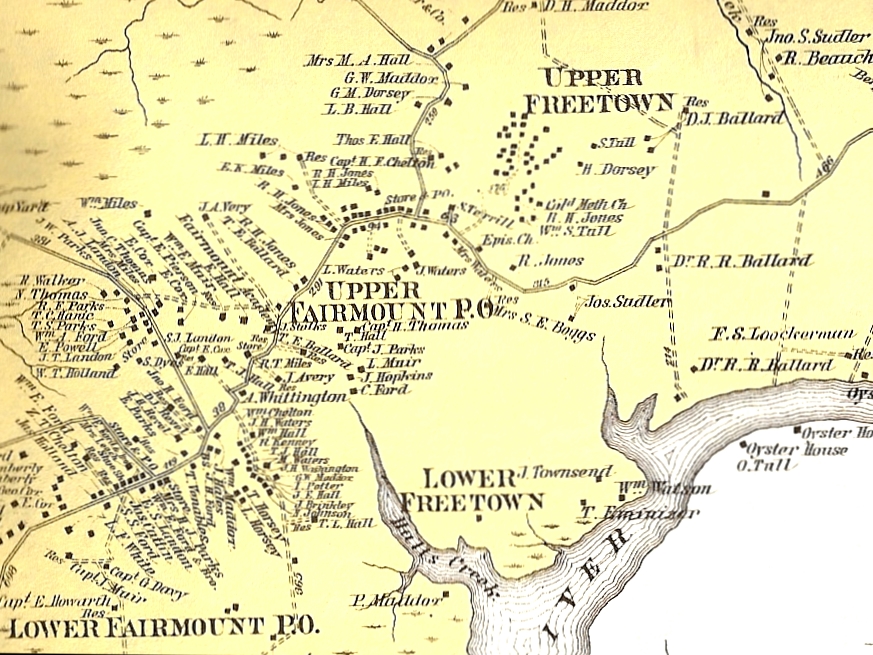 I’ve discussed deeds in this blog before and why they should be a cornerstone record in researching the lives of your ancestors.

In this post, I show how using deeds connected a family from the 1850s through the mid-twentieth century.

Levin Waters and other ancestors lived in Somerset County, Maryland in a little community called Upper Fairmount and nearby Upper Freetown.

The 1877 atlas clipping above shows both areas. Freetown, I believe, got its name from the prevalence of free blacks in the community.

Levin is an especially tricky man to research. This neighborhood over the years was filled with other men, of all ages, also named Levin Waters.

So care in proving identity, and not just matching the name, requires a thorough search through a broad selection of sources.

Sometime before 1 May 1900, Levin Waters died. Because he left no will (which means he died intestate), the land that he owned descended by the laws of Maryland to his heirs.

His heirs decided to sell that land (to another man named Levin T. Waters, Jr.).

The 1900 deed provides the names and locations of Levin’s heirs. It describes the grantors with the important phrase “heirs of Levin Waters deceased.”

Daughters represent a problem when we don’t know who they married, so that’s one of the benefits of finding deeds like this.

One Amazing Deed Leads To Another

Look at all the family history provided in this one deed.

Before this deed, I had no information about at least half of Levin’s children. The deed reveals that Samuel and John Waters and their wives were living in Dorchester County, MD. The rest were still living in Somerset County.

I continued researching through Somerset County deeds for Levin’s children. The key is that I kept searching forward in time, long after Levin died.

That led me to another amazing deed. Before his death, Levin gave a small piece of land to Robert Moore. Robert was married to Levin’s daughter Elenora.

Robert Moore also died without leaving a will sometime before 1950. So, his land descended to his living heirs. Roberts heirs sold the land in May 1950 to George E. Waters.

The 1950 deed described the legal history of the land. It began by stating that the grantors were selling “the same land which was conveyed to Robert H. Moore by Levin Waters.”

The deed states that Beulah was living in Port Norris, New Jersey.
Russell Nichols and his wife Dora, William Smith and Olivia and her husband Lewis Keith were living in Atlantic City, New Jersey.

Lorena Horsey and her husband John were living in Philadelphia, Pennsylvania. All of the others were still living in Somerset County, Maryland.

In two deeds, we have mapped the family history of Levin Waters. He was born about 1820 and the deeds continue through his daughter Elenora Moore’s heirs in the mid-20th century.

Here are a few tips for your search:

Much of deed research consists of searching through very dry records that describe land boundaries and the legal transfer of ownership. Many deeds provide no information about families or relationships whatsoever.

The victory will come to those researchers diligent enough to keep searching.

There are several good books and lots of training available to help you understand deed records and how to use them.

One of my favorites is the Deed Records course offered by the National Genealogical Society. Learn about using deed records before you dive in, or you’ll be looking at a lot of documents that you don’t understand.

Those of you who have made discoveries using deed records, I’d love to hear about it in the comments.