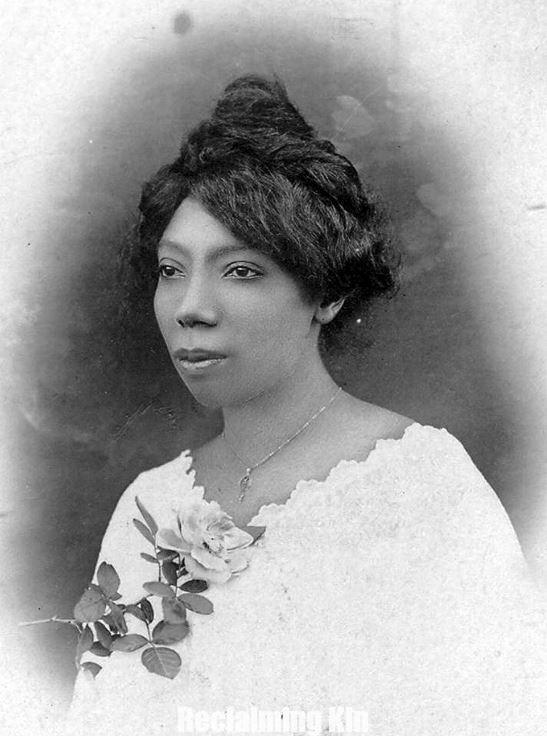 I am fortunate to have copies of postcards that some of my ancestors sent. They are a wonderful artifact to have for genealogy, as are handwritten letters. They can also be used effectively to solve research problems.

The Harbour Family: A Stubborn Problem

Hannah Harbour had two children, Doss and Odie, with her first husband Joseph. She had three more children and later married their father John Bradley.

Hannah and her children were living in Hardin County, Tennessee in 1900:

The family was also living in Hardin County in 1920 (with her 2nd husband):

Usually when I find a family “sandwiched” in census records like this, it suggests that the family is probably there. I know I need to read through the entire district, page by page, to try to find them.

Census records have far too many transcription, spelling and quality errors to quickly conclude that a family has been missed.

You’d be surprised how many people can be found when you look carefully through the neighborhood, and abandon the search feature on Ancestry.

So I did that and still didn’t find them.

This problem bedeviled me for many years. I think you can all relate to a missing record that just feels like a thorn in your side.

One day, I was reviewing my records and came across a set of postcards I’d copied many years prior.

I found one from Hannah’s daughter Pearl, writing to her aunt back in Hardin County, written in 1910. I zeroed in on the postmark and lo and behold it said: Wybark, OK: 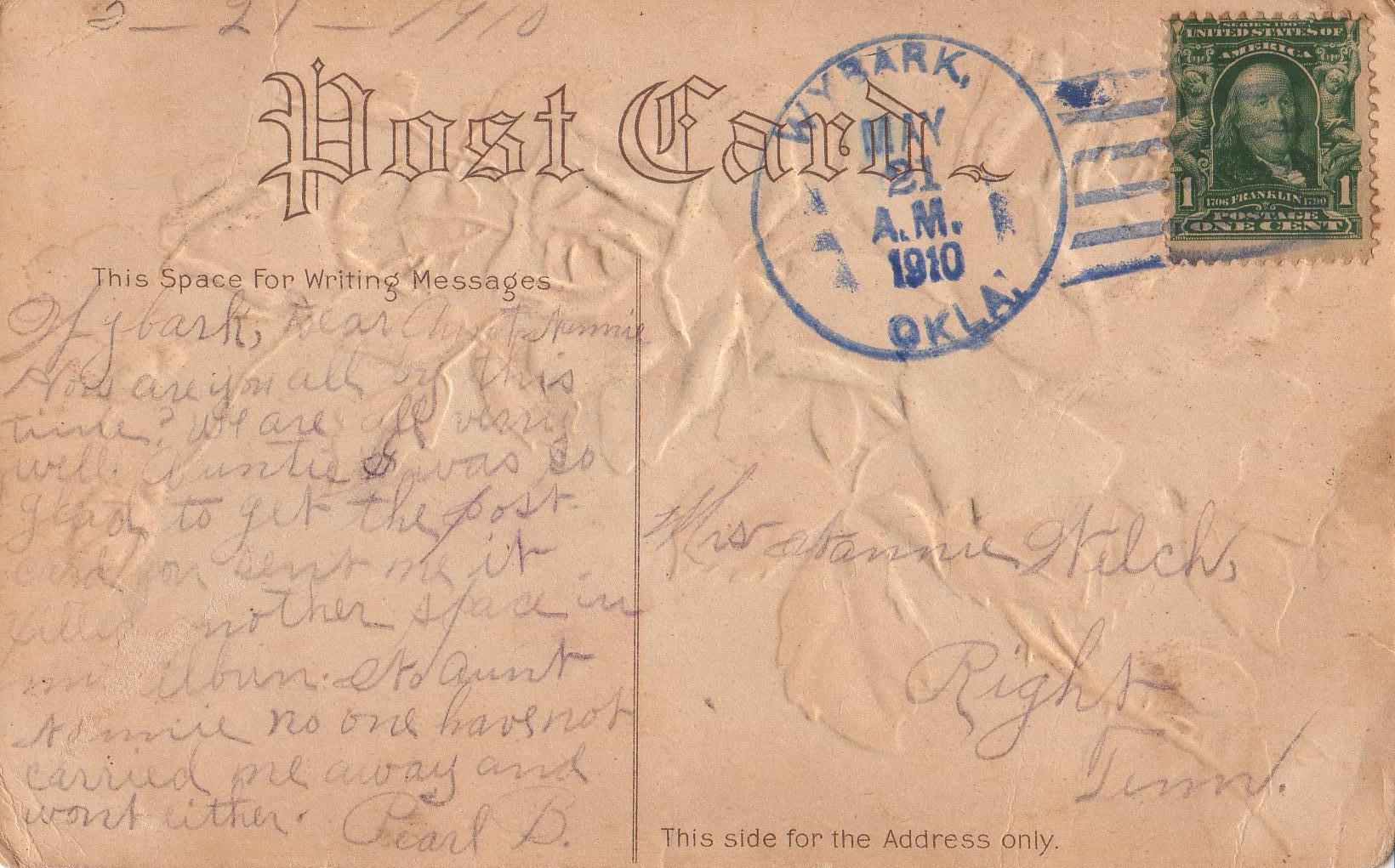 I quickly went to Ancestry, the year 1910, and wouldn’t you know it, that’s where the family was.

The census enumerator recorded the entire family under the surname BRADY instead of BRADLEY:

This shows that even though my “sandwich rule” holds true in most cases, it did not here.

The family relocated to Oklahoma, where John was farming, but they moved back to Hardin County by 1920. Maybe John wanted to try his hand farming in a new place and it just didn’t work out.

Other Tidbits of History

Postcards also revealed the story that daughter Magnolia (whose picture heads this post) worked in Waco, Texas for many years in the 1910s and owned a business there: 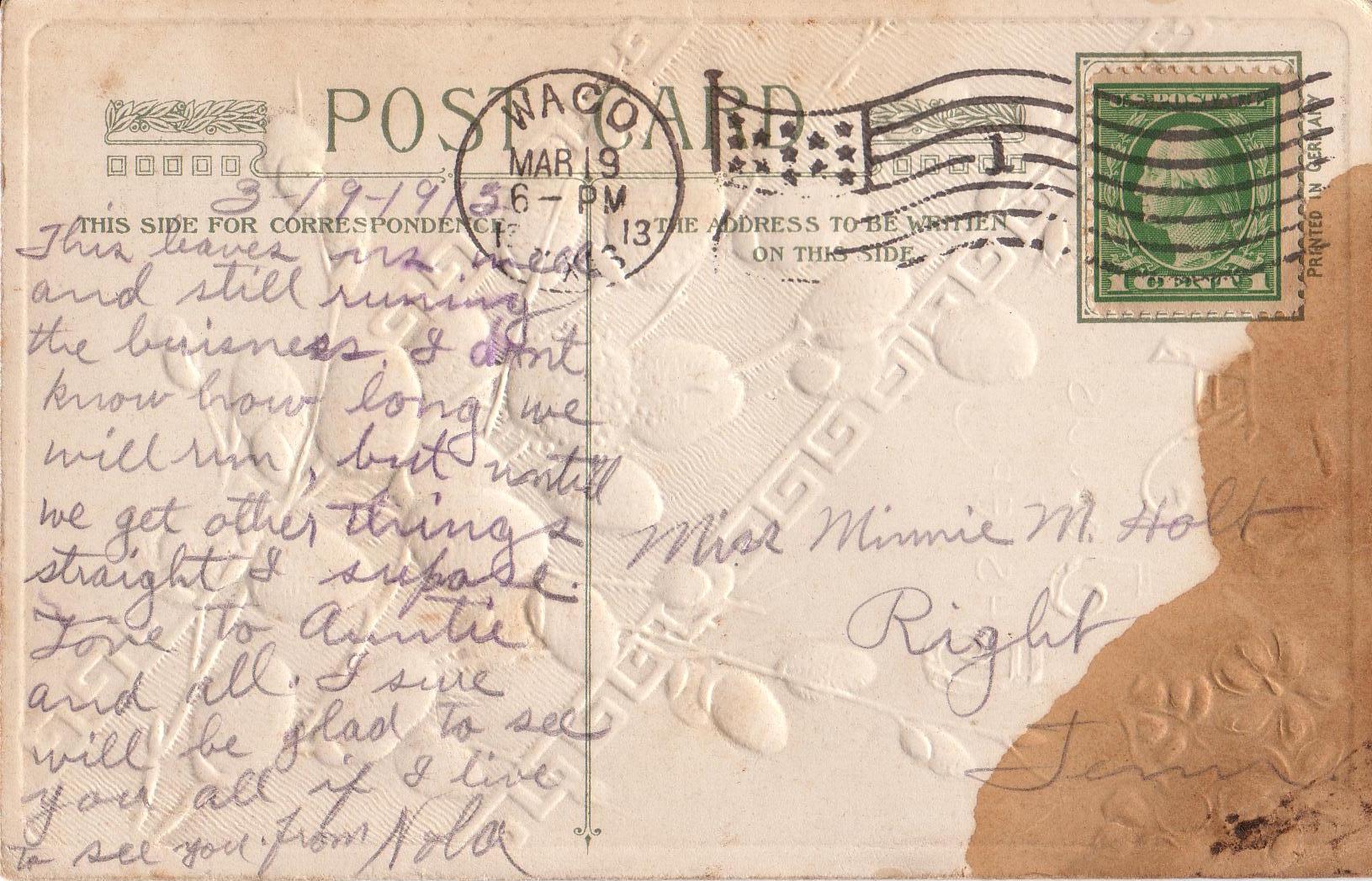 The postcard below, from Ollie to “Aunt Nannie,” led me to find Ollie living in Chattanooga, Tennessee (see postmark): 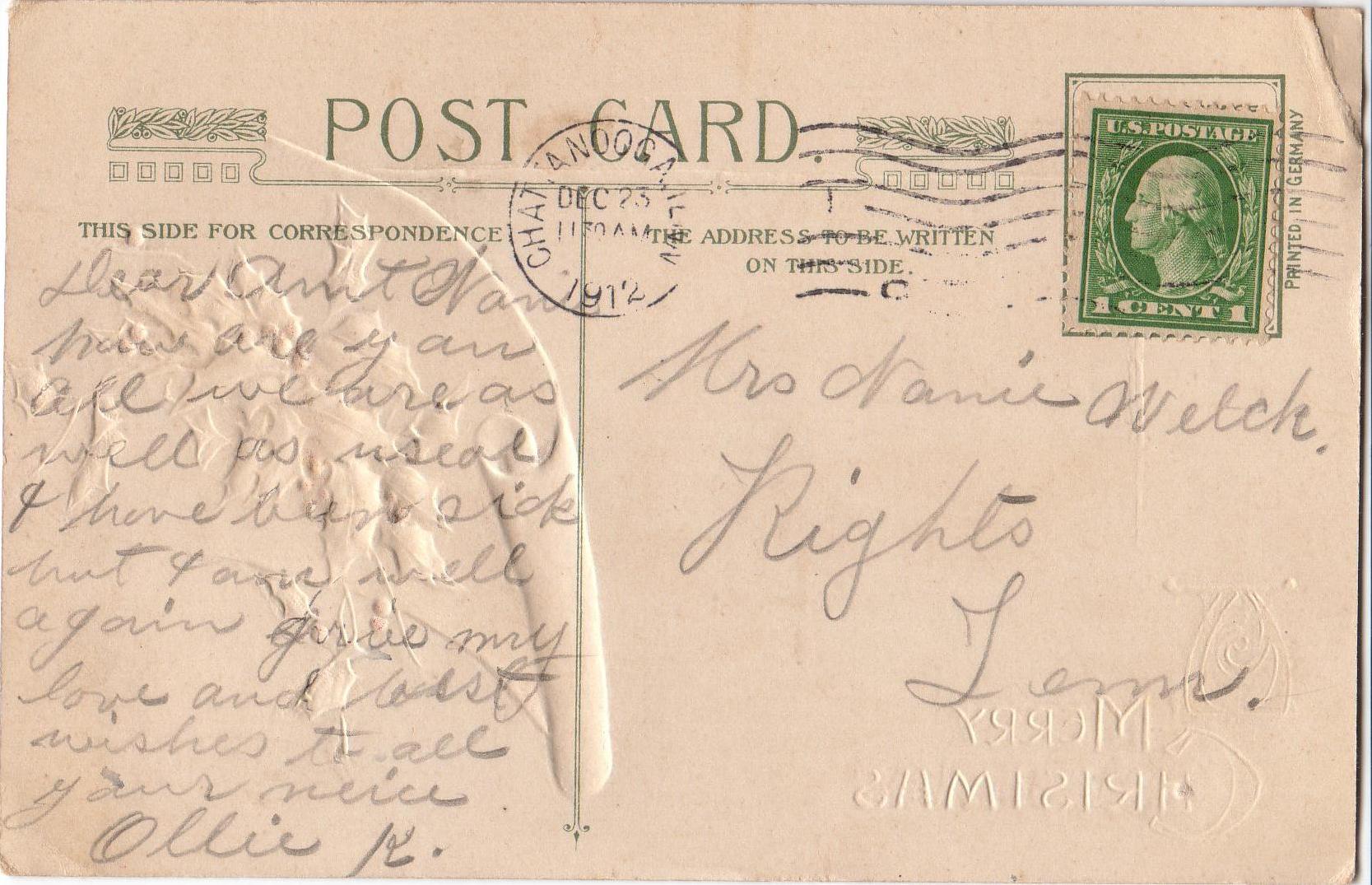 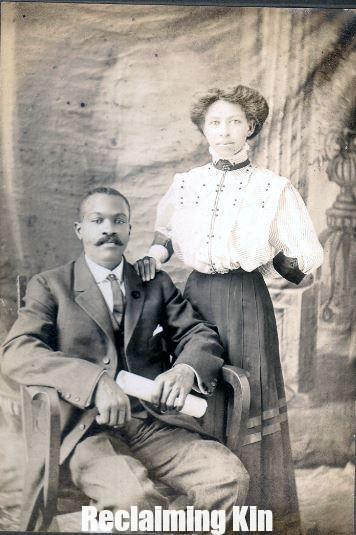 Lastly, I have a 1913 postcard, written by  Adelle Barnes of Jackson, TN, to Nannie Barnes: 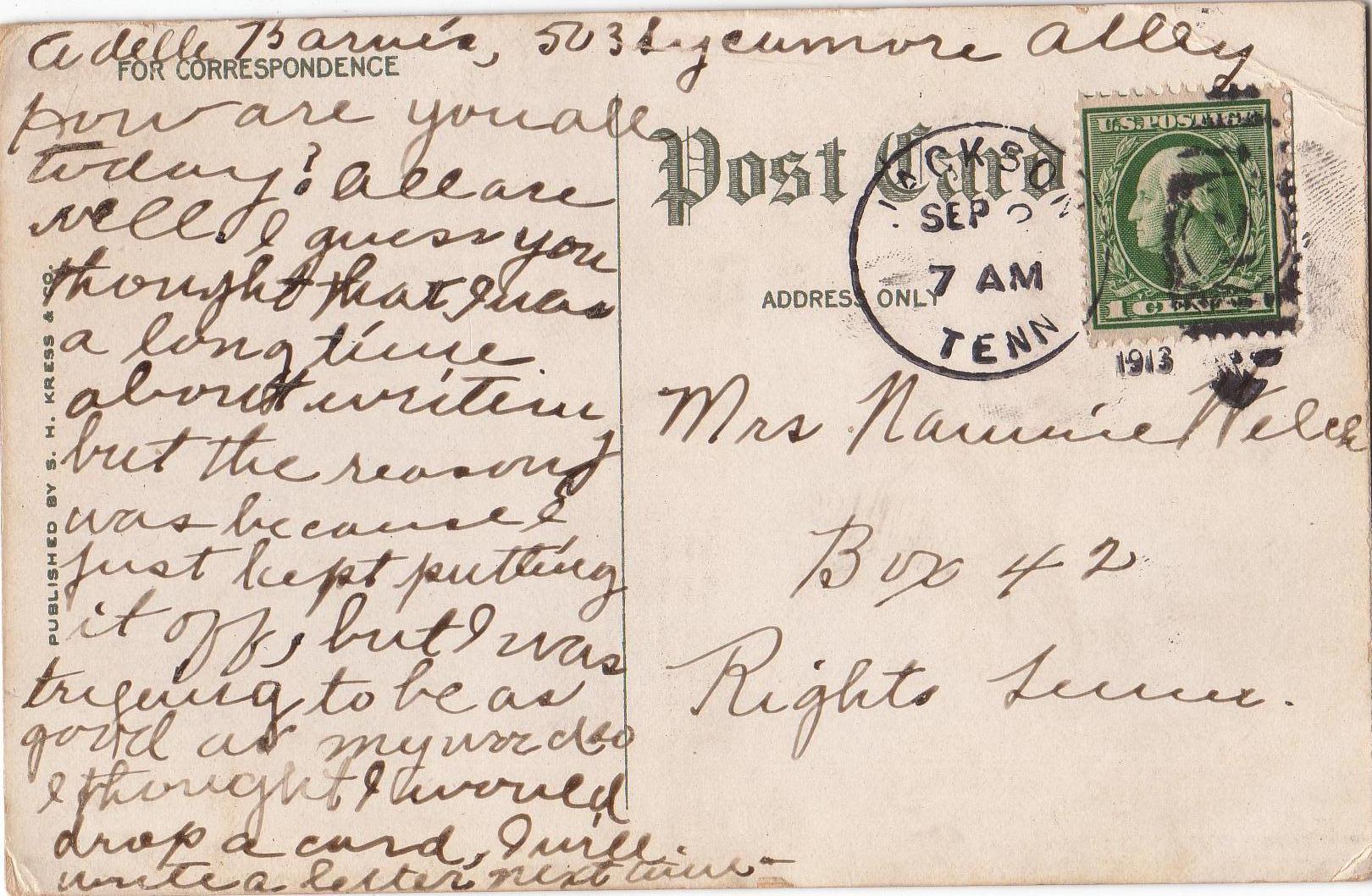 Adelle’s Barnes surname suggested to me she may be a relative.

I found Adelle in Jackson in the 1920, 1930 and 1940 census records as Adelle Dawson. I confirmed it was the same woman from the postcard using the address.

In 1917, she married  Holmes Dawson. However, subsequent searches failed to find Adelle in a census as Adelle Barnes.

I ordered Adelle’s 1977 death certificate and even though her parents were named, I didn’t recognize them. Otis Barnes and Helen Smith.

I was stuck again, until I found obituaries for Adelle’s mother Helen and several of the other family members.

Displaying just how valuable cluster research is (don’t know what that is? Read about it here) her aunt Jennie’s obituary contained quite a bit of family history.

But with these new names and relationships, I found Adelle in 1910 living with her mother in her grandmother’s house, hidden under the surname SMITH:

And in 1900, finally, I found Adelle, still living with her grandparents. I saw immediately why I couldn’t find her before:

Even though she was a BARNES, the enumerator heard BONDS and that was what was written down and transcribed! These census records will get you everytime.

Taking these records together, along with the lack of marriage for Helen Smith, it appears that she had Adelle out of wedlock.

That’s why I couldn’t find the Barnes household I was originally looking for. Assuming people are married when they have children is something we need to remember is not always true.

I had the names of Adelle’s parents, Otis Barnes and Helen Smith, but those names rang no bells for me. I decided to go back through Nannie Barnes’ family tree to look for candidates.

Nannie had a brother named Campbell Barnes who was enumerated with his family in 1880. In Campbell’s 1880 household is the best candidate for the mysterious Adelle Barnes’ connection to Nannie.

One of Campbell’s children is named Odie. And even though the census marks this child as a female, perhaps that was a mistake. Odie Barnes. Otis Barnes. Pretty close: 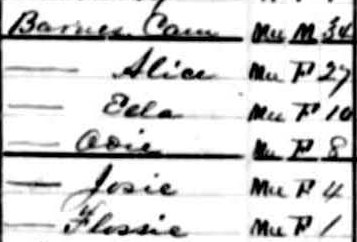 This is the current hypothesis I am working on.

I hope this post has underscored how valuable postcards can be when we scrutinize them for clues.

They also illustrate how widely traveled our ancestors were even in the era of steamboat and railroad travel. That surprised me.

Has anyone else had luck with postcards?