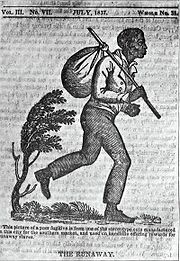 I have been studying runaway slaves recently. One of my Prather ancestors ran away and was caught in DC in 1858.

“Runaway Slaves: Rebels on the Plantation” by John Hope Franklin and Loren Schweninger, is probably one of the most complete published studies.

Recently I purchased “Blacks Who Stole Themselves” (what a great title, right?).

This book features advertisements from the Pennsylvania Gazette for runaways from 1728-1790. Many of the runaways are from Maryland, Delaware, New Jersey & Virginia.

I have a know someone friend who teaches African-American History and we frequently discuss various aspects of slavery. He opened my eyes one day when were talking about Lincoln “freeing” the slaves.

He said to me, “NO, the slaves freed themselves. They ran away in such large numbers during the Civil War that they forced the issue.”

I keep thinking about what it must have been like to run away and have no concept of where to go. No maps. To risk your life over and go into the woods with your baby.

They knew they had right to freedom, and would do anything to attain it. 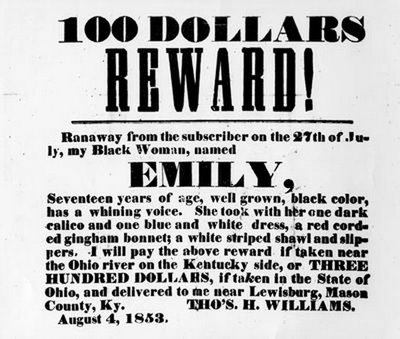 In general, in each ad there is a listing of where, when and who the slave ran away from. Often there is the slave’s age and name, a detailed description of their clothing.

Finally, there are usually comments about the slave’s personality, physical looks and perhaps occupation.

The ads are revealing on several levels. They document the prevailing views of the slaveowner’s beliefs about blacks and slaves.

Other things I noticed include:

There are a few websites which have undertaken the goal of documenting runaway slave ads. There’s Maryland’s Underground Railroad website, which includes runaway ads, and the University of Virginia’s project.

There’s also a site for Baltimore County, MD and The Geography of Virginia website. Check them out if you get a chance.

A PDF of colonial runaway ads is also available

The Power of Resistance

I am inspired that slaves constantly resisted the system of slavery, with dedication and perseverance. This post is dedicated to a slave who ran away in 1759:

“…a negro man named Caesar, he has both his legs cutoff and walks on his knees.”

Can you imagine? That one took my breath away. Caesar demanded his freedom so badly he would run way with no legs. Simply astounding.