Met His Fate by the Rope Route: Lynching

This country has a long history of racism, white supremacy, Jim Crow and discrimination. 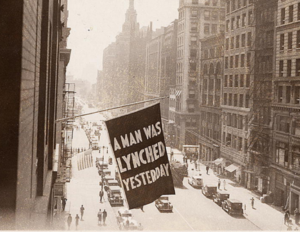 Violence is at the core of those systems. Without violence, they couldn’t exist. Far from being passive or willing subjects, African and Native peoples and their descendants fought back in myriad ways.

That’s why slave rebellions were often dealt with by using ever-increasing levels of depravity, such as burning bodies and cutting off heads.

Lynching is what I call the original American brand of terrorism. These murders were unique.  Lynching sent a message to the community. Its goal was to stifle black achievement and keep black people “in their place.”

The 1874 drawing below shows the KKK and White Leagues shaking hands over defeating a black family. There is lynching and a school burning in the background. 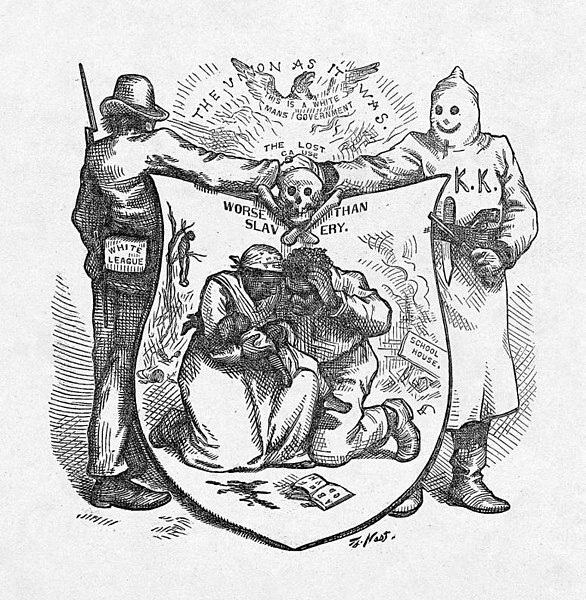 The NAACP conducted extensive research into lynching and pushed for federal legislation that never passed.  Brave journalists like Ida B. Wells-Barnett spoke and wrote about lynchings.

It must have been a frightening time for our ancestors who risked their lives to vote, buy land, build schools and teach. I am filled with a deep sadness whenever I think about how striving to better oneself was met with violence.

I am glad I live in a time and place where I can have friends and family of all colors, ethnicities, religious beliefs and sexual preferences. That does not mean that the forces of hate are not alive and well. The battle continues.

Early in my research, I discovered the story of a lynching of one of my Holt ancestors. I never thought I would find documentation, but I did. The Savannah Courier was the local paper in Hardin County, Tennessee. Like other newspapers of the time, it was replete with stories of race riots and lynchings throughout the 1880s and 1890s.

“George Holt, col., who lived near Sibley met his fate by the rope route last Friday.”

I was shocked by the sarcasm and  brevity of it, as if it were the most natural thing in the world. The author had the audacity to write “Suicide” atop this notice, which of course is a fabrication.

George Holt, I later discovered, was the brother of my gggrandfather John W. Holt. He owned hundreds of acres of land at the time of his death, and he had a wife and six children. Some of George Holt’s descendants believe it had to do with a dispute over his land. However, I’m sure we will never know the true reason.

This happened in a  rural West Tennessee community that never had a large black population. Though slavery and racism existed, I know this act of terror must have rocked this small African-American community.

Did George know his assailants? How did his family go on after that? Why did they stay there? How do you rebuild? Is revenge ever an option? His brother John became one of the most prominent blacks in the county– land wealthy, a merchant and former Postmaster.

How did John react? Did he know who did this? I think what I cannot fathom is the idea that there could be no assumption or hope for justice. Law enforcement did not protect black people.

These are questions for which I’ll never know the answer. Our ancestors take many of their secrets with them, never to be discovered. Years ago, I was searching through the local black cemetery in the community. Digging through the bushes, I came face-to-face with George Holt’s headstone.

The vines and roots came out of the ground and wrapped around the headstone. I got chills up my spine. That moment really shook me.

Today, I remember George Holt and all the others, named and unnamed. All those men, women and children who met their fate “at the hands of persons unknown.” May they rest in eternal peace.