Criminals In The Family

One of my shadier ancestors was Joseph Harbour, my 4th great grandfather. He was born in September 1852 in Hardin County, Tennessee.

In the early years of my research, he was a mystery. He only appeared in one census (1880) census, married to Hannah Barnes.

I assumed he died after that. (I’ve since learned that we must always remember our assumptions )

I’ve blogged before about various types of court records.  In my lecture on Court Records, Joseph is the star.

Only when I finally got up enough nerve to venture into local court records did more details about his life emerge.

Joseph Harbour appeared in the criminal court records from at least 1882 to 1897. In 1882, he was charged with profanity.

The court minutes alleged that he stood out in front of a church house and said:

Someone called his bluff and actually reported him! Sounds like he may have been drinking to me.

The records show that Joseph left his first wife to marry another woman, Rachel Shannon.

Before his marriage to Rachel, the court charged them both with Lewdness (my mind can only imagine what they were caught doing).

For the next decade, Joseph was a constant presence at the courthouse: 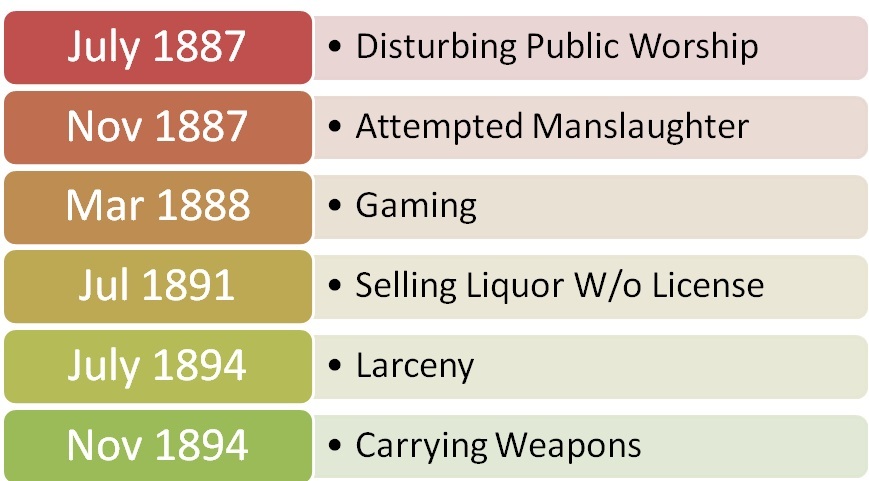 Amazingly, Joseph escaped all the charges with fines, even the more serious charge of attempted manslaughter.

Joseph’s escapades must have caused Rachel to contemplate whether taking Joseph from first wife Hannah was a good idea.

By July of 1895, Rachel filed divorce papers against Joseph with the Circuit Court.

Their divorce papers detailed a violent and troubled marriage with both charging the other with adultery.

In addition, Rachel stated that Joseph “threatened to kill her,” while Joseph responded that “the child born during their marriage was not his child.”

Their divorce was granted in 1896, after testimony from witnesses on both sides. I have heard of some crazy divorces in my time, but my goodness!

After the divorce, Joseph Harbour disappeared from the written record in Hardin County, however, some of his descendants remain living in the county today.

Let me state for the record, they are lovely people;)

Now I understand why his first wife Hannah, when asked her marital status in 1900 answered that she was a widow (leading me to believe that for many years).

I guess he was dead to her, LOL.

How Do You Find Criminal Records?

Find out the name of the court in your research state that records criminal cases. In some states, as in Tennessee above, it was the Circuit Court.

Some suggestions to find this information is:

Once you know the name of the court, find out where the records can be viewed. Typically places include the county courthouse and the state archives, and the Family History Library in Salt Lake City, Utah.

Don’t neglect books that contain abstracts or extracts of court records, genealogy websites that may include indexes.

When you access the records, most (though not all) bound court records are indexed. Keep in mind that in addition to bound volumes, there may be loose records available to view.

Be sure to write down the date of each record, especially since the date may be on a prior page. Additionally, you may need to search across several sessions of court, since many cases were carried over.

Come back here and share with us any interesting stories you find in these records.