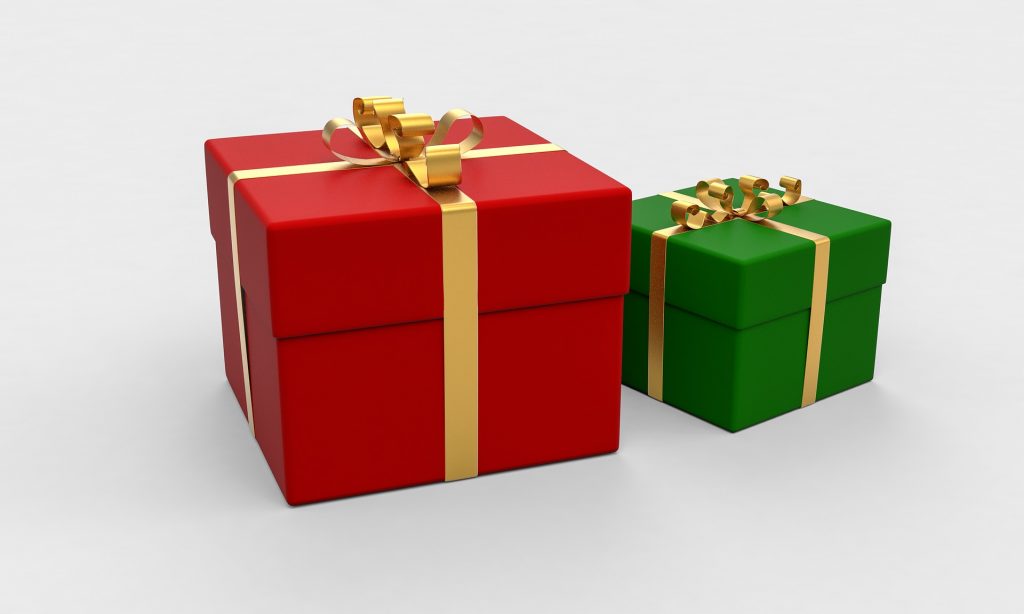 It was while recently writing about Mike Fendricks’ family that I made one of the biggest discoveries in 25 years. I recovered the identity of my 2nd great-grandmother, an enslaved woman named Salina Sherrod. It was my favorite gift this year!

First, everyone should write up their family history. I suggest focusing on one surname at a time.

Writing helps you to see where you might have gaps in your research, and helps in thinking through your logic and making sure everything makes sense.

Moreover, it allows a deeper focus on your sources to make sure that you fully understand what each one conveys. This is why I created a page at Reclaiming Kin where you can access articles by myself and others to provide examples and inspiration.

Secondly, when I teach slavery research, I always recommend searching thoroughly in the  post-emancipation timeframe first.

Many records created after slavery’s demise can point back to enslaved roots or even the former enslaver: deeds, Freedman’s Bank, Freedmen’s Bureau records, obituaries, and probate records just to name a few.

What was Mike’s Wife’s Name?

I have blogged before about my quest to find the Fendricks family. Mike and his wife were from Alabama but migrated to Tennessee where they lived and raised their family. Cluster research helped me to uncover Mike’s half brother Dee and mother Sofrona.

Mike’s wife appeared in records with several name variations. In her 1879 marriage record, she was called Eliza Sherrill.

Taken together, the sources suggest her name was Jane Eliza, and that she was called Katie as a nickname by her family.

Searching for her origins was complicated by the fact that her surname could have been Sherrill or Sherrod, both surnames that appeared in the Alabama counties of interest.

I had to put her on the shelf until I had time for deeper research.

While writing, I often re-check records and databases and order original sources to make sure I didn’t miss anything. While searching at Newspapers.com, I found the 1914 advertisement shown here: 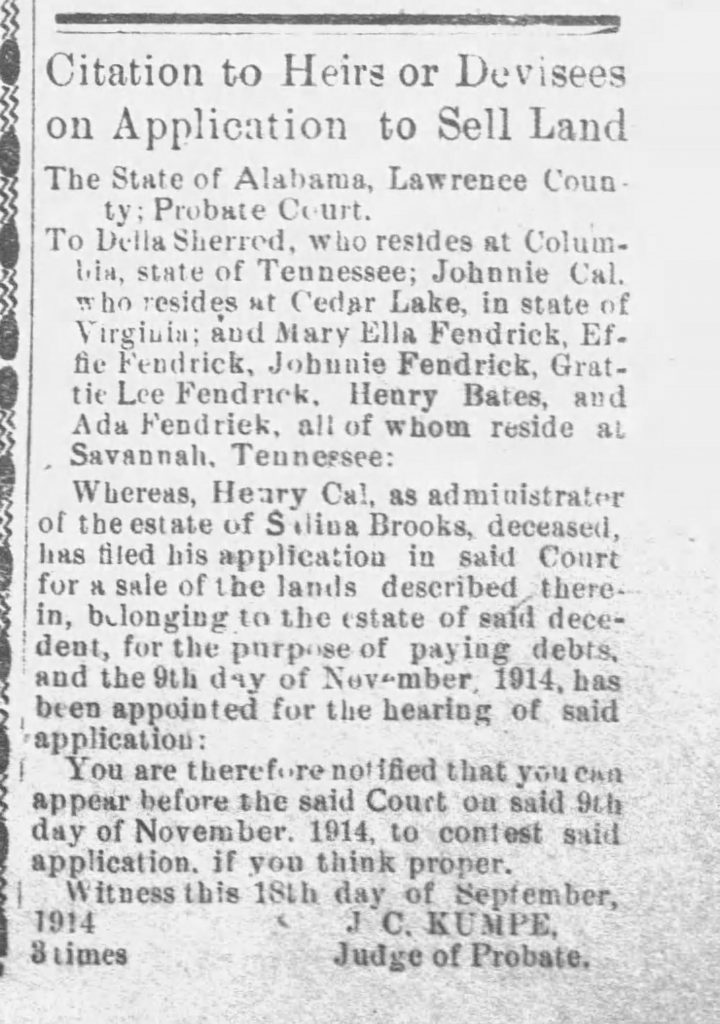 This ad named five of Mike and Jane Eliza’s children (my great-grandmother Effie and her siblings) as heirs to the estate of a woman named Salina Brooks. Seeing this record, in Lawrence Co, AL, really took my breath away.

It also named other heirs I had never heard of before. I was however, familiar with the name Salina Brooks.

Mike’s brother Dee boarded in her household in 1880–I have looked at this household a hundred times! Writing helped me to see that I hadn’t yet researched her as a FAN club member, otherwise called cluster research. Right under my nose all this time! 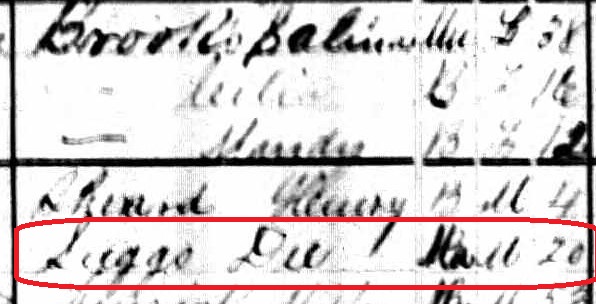 The Advertisement and Probate Records

What was this ad for? Well, it was the result of a probate proceeding. Henry Cal, as Salina’s administrator, was selling her land to pay debts.

State law provided that certain court actions be publicized so that any others who have a claim to the estate can appear at the hearing.

While this was tantalizing, the first thing to do was to order the original probate records that resulted in this ad. I was fortunate that Lawrence County has a separate archives. They will retrieve records for a fee and Wendy, the Archives’ amazing director, did not disappoint. She is so knowledgeable and helpful.

The original records named even more heirs than did the advertisement, probably due to space and size:

All were over 21 years of age. Also named as heirs, but under the age of 21 were:

If I had not taken the time to order the original probate records, I would not have had all those additional names.

I found the answer after many, many hours of researching those named and building their family trees. This wasn’t just done online as nothing should be. I ordered records from various repositories and I went to the Family History Center to retrieve some original records myself.

I was able to discover the relationship of every person named except for one.

They were all the children or the grandchildren of Salina. Salina’s maiden name was Sherrod, but by the time she appeared on the 1870 census she was married to Lewis Brooks. Those damn census records can be so deceiving!

Salina had seven known daughters. The inclusion of my great-grandmother Effie and four of her siblings on that list of heirs can mean only one thing.

Jane Eliza had at least six sisters, whom I now have identified. Her father is still currently unknown as they were conceived during slavery.

I have dozens of new collateral ancestors and knowing this line will surely help identify more DNA matches.

This is how a 20th century source can uncover an enslaved ancestor. And why writing can’t be beat for brick wall busting.

Kin Reclaimed: Salina Sherrod and the identity of six sisters!